Some two weeks ago, unusual guests arrived at a major Israeli defense plant: The representatives of Palestinian security agencies. They sought to purchase non-lethal means to disperse demonstrations, including stun grenades and tear gas. All of a sudden, Palestinian Authority officials realized that deterrence alone won’t be enough and that they may end up losing control.

Up until a month ago, Palestinian security officers in the West Bank would mock their Israeli counterparts over their panic and what was termed exaggerated IDF preparations ahead of September. Suddenly, these Palestinians are no longer smiling. Suddenly they realized that a genie in the form of impassioned, incited masses could erupt, just as it happened in Tunisia, Egypt and Libya. This genie may drown the Palestinian dream of independence in smoke, blood and tears.

Israel’s Defense Ministry approved the unusual Palestinian request after a few days. The Americans in charge of training and funding the PA’s forces asked for Israel to offer its help. The IDF also recommended a positive response. At the end of the day, the Defense Ministry’s director general approved some of the procurement requests. 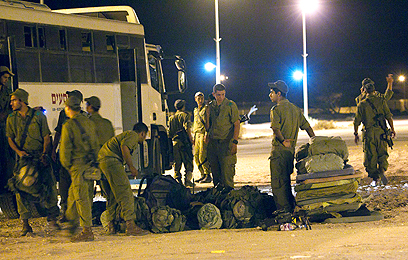 Number of troops being boosted in Judea and Samaria (Photo: EPA)
For the time being the IDF’s September deployment, codenamed “Summer Seeds”, is proceeding in line with the book drafted by Southern Command Chief Avi Mizrahi. This week, the army started to call up reservists; mostly Judea and Samaria residents meant to provide static defense around local communities and major road. In addition, regular IDF units reinforced communities featuring higher risk of friction with Palestinians.

Early next week, the IDF will embark on a special deployment and the entire regular army will be subjected to daily assessments based on developments in the field. Within Israel, the police will go on high alert in order to prevent infiltration by provocative elements, with an emphasis on the Jerusalem region and villages located on the Green Line.

The IDF General Staff already prepared emergency call-up orders in case the situation deteriorates and the army needs to reinforce its regular troops. Meanwhile, some Reserves units underwent special training on coping with riots in the past two months. The IDF Central Command already boosted its regular forces in the West Bank and may even double them, in order to create a critical mass at any heated junction. Both the police and army are undertaking special preparations at critical trouble spots, such as Jerusalem. About a month ago, both organizations undertook joint training with the participation of some 1,000 police officers. Among other things, the police simulated an effort to curb Arab-Israeli movement towards east Jerusalem, while the Army sealed off roads from Ramallah and Bethlehem. In the near future, Jerusalem will turn into a security screened city.

‘No casualties, no fatalities’

A lengthy process of preparing Judea and Samaria communities for the possibility of mass breaches ended on September 20th. A system of defense rings comprising Border Guard forces, riot police and specially trained soldiers was set up. Officials intend to counter the masses communities far away from Israeli fences and homes. The closer the protestors get, the higher the likelihood of live fire.

Senior officials instructed the forces to end every event without casualties, and most certainly without fatalities. After all, Palestinians in the West Bank do not warrant the same treatment as Syrians or Gazans who cross the border. Each community was subjected to tactical analysis by a regional division commander in order to identify access routes and vulnerabilities. The response was formulated in line with the analyses: Non-lethal weapons in more distant rings, but a whole different story in case the masses reach a community or a military base. In extreme scenarios where the masses surprise the army and reach a community without being stopped on the way, the IDF will use armored personnel carriers and even tanks to disperse the crowds. 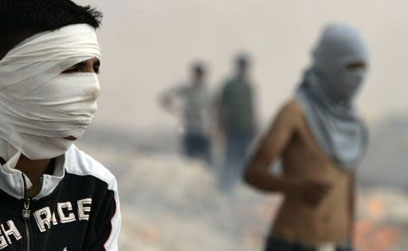 Preparing for worst, hoping for best - Naalin protests (Photo: AFP)
All of Israel’s intelligence gathering forces were also enlisted for the mission. This includes electronic intelligence gathering, surveillance means, drones, balloons and planes. The massive force combined with real-time intelligence is meant to avoid victims. Officials estimate that any fatalities would translate into images reminiscent of Cairo, Damascus and Libya that would be immediately aired worldwide and prompt chaos.

Palestinian officials are formulating plans aimed at orchestrating simultaneous rallies while controlling the masses and preventing escalation. All PA security agencies, which number roughly 23,000 forces, will aim to prevent protestors from leaving areas under Palestinian control, as not to encounter the IDF.

Top security officials already set up a command room that will receive information from across the West Bank. Regiments had been assigned to the various cities and a reserve force was formed in order to reinforce areas where local troops have trouble containing the masses. The orders to Palestinian security forces are similar to the instructions issued to Egyptian policemen: Civilians are not to be shot under any circumstances. Yet this raises a concern as well – a determined mob who realizes that it will not be shot at may overcome police officers equipped with bats and shields only. This prompted the urgent Palestinian request to purchase Israeli non-lethal weapons.

And back to Israel. The army developed techniques for splitting protestors and handling leaders within the crowds. Moreover, the IDF possess crowd dispersal means of unprecedented quality and quantity. One such secret weapon is the so-called “skunk,” a foul-smelling liquid that human nostrils cannot withstand. It will be spread in the field using some 20 vehicles. A recent experiment involving aerial liquid “assault” concluded successfully.

The army already purchased 50 tons of the liquid. Soldiers serving at the units where the “skunk” had been stored are complaining about the smell. Should the West Bank indeed by flooded with such quantities of putrid liquids, it will be the world’s stinkiest region for a long time to come. The army also equipped itself with the so-called “scream,” a device producing sounds that the human ear cannot bear. Other means include special weapons that fire rubber bullets, sand bullets, stun and smoke grenades, tear gas and other such unpleasantries. But how will the army contend with 40,000 people who march quietly, refrain from hurling stones, avoid clashes with police, but move closer to major junctions or to border crossings? How do we handle them? After all, they are doing nothing wrong. How many tons of foul-smelling liquid must be dumped in order to stop a column of 100,000 people?