RAMALLAH – With the clock ticking down to the PA's statehood bid at the UN, the masses in Ramallah can no longer contain their excitement prompting the Palestinian Authority to officially launch its independence celebrations on Wednesday.

Thousands of Palestinians flocked to central Ramallah ahead of a mass march planned in the city, which is the seat of the Palestinian Authority's leadership. Similar marches and rallies will be held in all major Palestinian cities in the West Bank throughout the week.

The Palestinian Authority decided to launch the celebration despite the bid's somewhat ambiguous future. Palestinian security forces have been deployed across the West Bank, pledging to maintain the order.

"This is the final stretch. Everything is ready. All that is left now is for us to fly the flags," Muhammad Azzadin of the Palestinian Infrastructure Ministry told Ynet.

"Our dream is becoming a reality, we will have a state," banners hung above Ramallah's main highway read. Across from late PLO Chairman Yasser Arafat's tomb at the Mukataa in Ramallah, the Palestinians have prepared a special plaza, where they hope to hold the official celebrations, should their statehood bid be accepted.

"We are all very excited," Azzadin added. "Just like you Israelis wanted an independent state, so do we," he told Ynet.

Thousands of Palestinian gathered in the Clock square in Ramallah – which is second to the city's Manara square – for a celebratory rally: The Palestinian various governmental institutions and schools declared Wednesday a half-day, so to allow people to attend the rallies, and various speakers stated their support for UN bid. 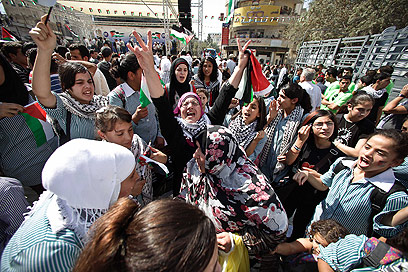 Revelers of all ages at Clock Square (Photo: Noam Moskovich)

"We chose to turn to the UN after all the other options failed," PA Secretary General Tayeb Abdelrahim told the cheering crowds. "Our message to our leaders, Mahmoud Abbas and Yasser Arafat, is: The people support you. The Palestinian state will be formed within the 1967 lines and Jerusalem will be its capital."

"The world must be just and smart and end the occupations… and make us the UN's 194th member," he continued. "The (new) state will abide by past agreements, but we refuse to negotiate for the sake of negotiating. The people want the two state solution – not an apartheid state.

"The Netanyahu and Lieberman government threatens to cut off our funds and annul deals, as if they had not broken them so many times before. There is a Palestinian partner (for peace) but there is no Israeli partner," Abdelrahim said. 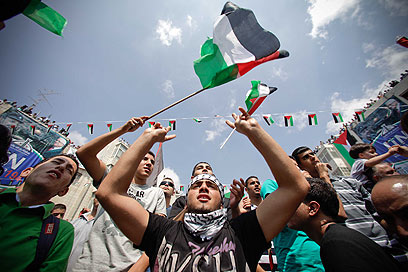 Ramallah governor Laila Ghanam took the stage next. She too voiced her support for Abbas, and urged him to stand firm and submit the Palestinian statehood bid to the UN Security Council.

The Palestinian people have a right to a country where they can realize their national goals, she said.

Meanwhile, in New York, with just hours left until the UN General Assembly officially convenes, the US and its allies are still trying to get the PA to withdraw its bid.

US President Barack Obama is set to meet with Mahmoud Abbas later in the day in yet another attempt to stop him from officially launching his case for the Security Council's approval of the statehood bid. Israel has mounted what has been called a "diplomatic blitz" at the UN, in a last ditch effort to thwart the PA's bid.

The Israeli campaign is meant to prevent a two-thirds majority from endorsing a Palestinian state in the vote, thereby avoiding a US veto against the decision.

Prime Minister Benjamin Netanyahu is also expected to meet with Obama on Wednesday, to discuss the latest developments.

Also on Wednesday, Poland, which serves as the current EU president, said that Israeli security must not be threatened should any change occur in the Middle East due to the Palestinian bid for statehood. Flags across from the Mukataa (Photos: Noam Moskowitz)

Prime Minister Donald Tusk said that Poland's position on the bid depends on the wording of the UN resolution on Palestinian statehood. He noted Poland's decades-long good relations with the Arab nations, and especially with the Palestinians.

Warsaw has been urging the 27-nation European Union to work out a joint stance on the Palestinian bid.

France also urged the Palestinian Authority to drop its UN membership bid: The French and US presidents planned to heap pressure on their Palestinian counterpart Wednesday in a concerted push to persuade Mahmoud Abbas to withdraw his bid.

French President Nicolas Sarkozy will make his pitch during a speech at the opening session of the UN General Assembly.