"To a large extent, the American caused the Palestinians to develop high expectations," political science Professor and Director of the Begin-Saadat Center for Strategic Studies Efraim Inbar told Ynet.

According to Inbar, "The Palestinians were fantasizing, and when reality shattered in their faces, they gave up any hope for negotiations.

"Obama demanded that Israel freeze the construction in the settlements – a demand that has not been voiced by any American administration prior to Obama. The Palestinians hoped that Obama will continue with this line, but when they were urged to sit down to the negotiations table without receiving any guarantees on the right of return or the division of Jerusalem, they refused to compromise."

Inbar stressed that the Israeli-Palestinian discordance cannot be separated from the waning American influence in the region, which he says "gave a basis to the Palestinian refusal. 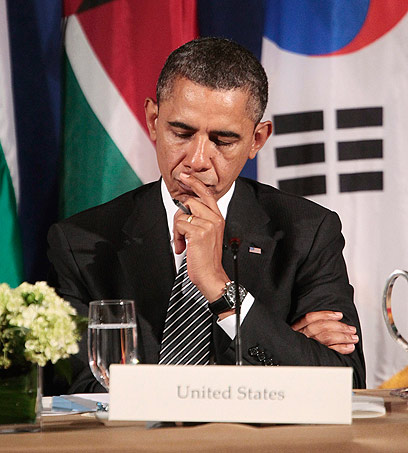 Obama's failed Mideast policy led to Palestinian UN bid? (Photo: AP)
"It's a new strategy, by which they are trying to receive things without negotiations. They decided to turn to international organizations, where they enjoy majority support," he added. Professor Eytan Gilboa Director of the Center for International Communication at Bar-Ilan University, also points to Washington as a main catalyst in the current Israeli-Palestinian crisis. "Because Obama asked Israel to freeze settlements, the Palestinians couldn’t ask for anything less than that," he noted, while stressing the big differences between the sides: "The Americans regarded the 10-month moratorium as a great achievement, while the Palestinians demanded a full moratorium – including Jerusalem – and without a time limit."

Unlike Inbar and Gilboa, former Ambassador to the United States Zalman Shoval, believes that it was the Palestinians' stance that led to the collapse of negotiations.

"Undoubtedly, the Palestinians, headed by President Mahmoud Abbas, made a strategic decision not to return to talks with Israel, because they realized that negotiations will require both sides to make compromises. According to Shoval, Abbas is unable and unwilling to make any concessions vis-à-vis the core issues, and therefore is planning a way to circumvent the United Nations and Europe. "The Palestinians are thinking, if we don’t get a state – at least we'll get a symbolic declaration from the United Nations; maybe we'll be declared as a non-member state, and then we can put it in the headlines and omit the rest," Shoval explained. At the end of the day, he noted, even of the American weakness has strengthened the Palestinians' hard-line stance, "The Americans are the only ones who can move things, and disregarding them might carry a high cost for all of us."