French President Nicolas Sarkozy proposed on Wednesday that the United Nations give the Palestinians status as a UN observer state while setting out a roadmap for peace within one year.

In an impassioned speech at the UN General Assembly devoted entirely to the Israeli-Palestinian conflict, Sarkozy warned that any veto against Palestinian efforts to seek full statehood in the Security Council "risked engendering a cycle of violence" in the Middle East."

Netanyahu thanks Obama for UN address

Obama at UN: No shortcut to peace 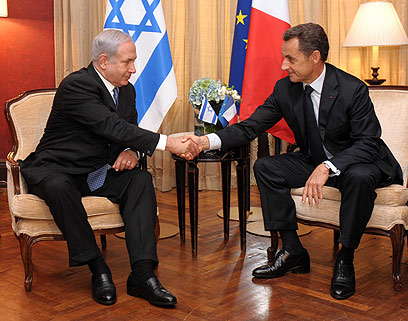 Netanyahu and Sarkozy at the UN (Photo: GPO)

"We can no longer wait ... Let us cease our endless debates on the parameters and begin negotiations," he said. "The moment has come to build peace for Palestinian and Israeli children."

France has grown increasingly frustrated at the lack of progress on the peace process, saying that negotiations should be widened to include a more hands-on role for Europe amid an ongoing impasse in US-led efforts.

Calling for a change of method, Sarkozy said negotiations should begin within one month, an agreement on borders and security should happen within six months and a definitive agreement be reached within a year.

"Today we are facing a very difficult choice. Each of us knows that Palestine cannot immediately obtain full and complete recognition of the status of United Nations member state," Sarkozy said. "But who could doubt that a veto at the Security Council risks engendering a cycle of violence in the Middle East?"

Sarkozy said the General Assembly should consider offering the Palestinians a status like that held by the Vatican, which would restore hope and mark progress to a final status.

"Why not envisage offering Palestine the status of United Nations observer state? This would be an important step forward. Most important, it would mean emerging from a state of immobility that favors only the extremists."

The Palestinians have said that as an alternative to the Security Council, where the United States has promised to veto any full membership vote, they could ask the General Assembly to approve upgrading their membership from "entity" to "non-member observer state."

Sarkozy met Palestinian President Mahmoud Abbas on Tuesday and will meet Israeli Prime Minister Benjamin Netanyahu on Wednesday. He called on the Palestinians to reaffirm Israel's right to exist and have security, while cautioning that Israel should show restraint.

A spokesman for the Palestinian president said Abbas would study Sarkozy's proposals.

"The ultimate objective of peace negotiations must by the mutual recognition of two states for two peoples, based on the 1967 parameters with the exchange of agreed and equivalent territories," Sarkozy said.

A Western diplomatic source said the time frame announced by Sarkozy was "one of the elements of a package" that European Union foreign policy chief Catherine Ashton has been working on and which she presented to EU foreign ministers on Tuesday.

Paris has upped its diplomatic push over the last six months on the issue as the Arab Spring swept through the Middle East, fearing that failure to revive the peace process could undermine that momentum.

Sarkozy also has an eye on presidential elections next year with the repercussions of an escalation in the Israeli-Palestinian conflict potentially spilling over at home, where there are more than 5 million Muslims and a Jewish community of between 600,000 and 700,000.

He warned on Tuesday that if there was no break in the impasse it could poison Arab countries' evolution to democracy.

After a hesitant response to the Arab Spring, Sarkozy has been an outspoken defender of the changes in the region, leading international efforts to help Libyan rebels in their uprising against Muammar Gaddafi.

France has previously offered to convene negotiators in Paris to discuss ideas for a Palestinian state, but Israel has traditionally been reluctant to embrace a major European role in Middle East peacemaking, preferring to have its main ally, the United States, take the lead.

Sarkozy proposed a Palestinian donor conference in Paris this fall. "Let's stop believing that just one country or one small group of countries can resolve a problem of such complexity," he said.


פרסום ראשון: 09.21.11, 21:25
commentsend to friendshareshare
See all talkbacks Close all talkbacks
new comment
Next
Previous
Warning:
This will delete your current comment
cancelOk