MK Shelly Yachimovich was elected Labor party leader on Wednesday, defeating MK Amir Peretz in the primary elections. She received 54% of the votes, while Peretz received 45%.

"We will work together as a united party," Yachimovich told supporters after the win was announced.

"We intend to bridge between the historic Labor movement and the new winds blowing on the street," she added. "With you, I know that it is possible to make real changes in Israeli society." 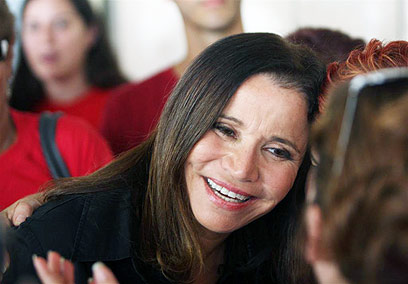 The initially tight race came to a close as Peretz called to congratulate his competitor, wishing Yachimovich "to bear the responsibility."

"I hope that we find common ground that will allow us to deal with the issues important to the State of Israel," he added.

Late on Wednesday night, Yachimovich arrived at the Labor Party center, and speaking to supporters placed Labor at the center of the political map. "We are a new non-sectarian party. We are committed to the poor and the rich, to Right and Left, to haredim and seculars, to Arabs and Jews."

She called for an end to privatization and urged Prime Minister Benjamin Netanyahu to recognize a Palestinian state alongside Israel as part of negotiations.

Yachimovich also noted that Netanyahu, Defense Minister Ehud Barak and Opposition Chairwoman Tzipi Livni all called and congratulated her on her win.

Other Knesset members placed congratulatory calls to Yachimovich as well.

MK Binyamin Ben Eliezer expressed hope that Peretz and Yachimovich will cooperate despite the hostility between the two camps.

"Cooperation depends on both of them," he said. "If they realize that our children lose when they fight, (if they) start over, everything will work out."

MK Daniel Ben-Simon said that the new development "is a clear opportunity to reshape the party's image… We have an exceptional chance here to move forward."

Yachimovich is the first woman since Golda Meir to head the Labor party.

A total of 61% of Labor party constituents exercised their right to vote in Wednesday's second round.

In the past few days the two candidates took to the campaign trail with enthusiasm, and while Peretz complained over the support his rival MK Yachimovich received from Labor Union Chief Ofer Eini, he was still optimistic thanks to former leadership candidate Amram Mitzna's vote of support. 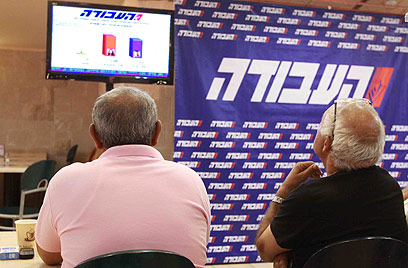 "The mobilization of so many supporters from the Herzog camp, our partner Mitzna, and party veterans, Labor Unionists and The United Kibbutz Movement has been both impressive and moving," he said.

Meanwhile, in the Yachimovich camp, the younger generation of Labor Party supporters is taking center stage. Yachimovich has received the support of many of the leaders of the recent social protests.

This week they were joined by Tel Aviv Mayor Ron Huldai, Raanana Mayor Nahum Hofri and of course, Eini who published an official announcement declaring his support.

On Tuesday Yachimovich assembled her supporters and announced that she was receiving support from Mitzna voters and from voters who supported Yitzhak Herzog in the previous round of voting.

"Tomorrow will decide not only who will lead the Labor Party but where the party is headed, its ideology, the trust the public has for it and the new strengths it will acquire," Yachimovich said.

Moran Azulay and Boaz Fyler contributed to the report