Palestinian protesters have denounced United States President Barack Obama for his opposition to their bid to win United Nations recognition of a Palestinian state. Dozens rallied on Thursday outside Palestinian President Mahmoud Abbas' office in Ramallah. They held up anti-Obama signs, including one reading "Obama the hypocrite" and another claiming the American president is siding "with killers against victims." The protesters also burned photos of the US president.

Obama told the UN General Assembly on Wednesday that a state can only be established through negotiations with Israel.

The US has said it would block the recognition request in the Security Council. 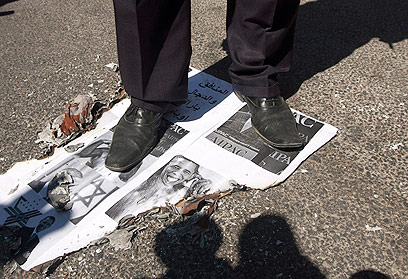 The IDF and the police are gearing for the possibility that clashes will break out Friday after Muslim prayers. Police will decide later on Thursday whether to limit the entry of worshippers into the Temple Mount compound.