As in previous years, Israel, the US and 11 Western countries did not take part in protest of event's focus on Israel instead of on other global hotspots where racism is present

As in previous years, Israel, the US and 11 Western countries did not take part in the conference in protest of its focus on Israel instead of on other global hotspots where racism is present.

The participants at the conference voted on a political statement affirming the declarations of the original Durban forum, in which Palestinians were labeled as "victims of racism". 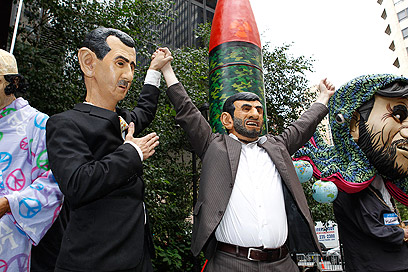 One of the speakers at this year's conference was Iranian Foreign Minister Ali Akbar Salehi, who spoke about the "human rights violations perpetrated by the Zionist regime" against the Palestinians. UN Secretary General Ban Ki-moon also spoke, referring to attempts to brand Israel as racist: "We are all aware that the original Durban conference and its follow-up two years ago caused immense controversy.

"We should condemn anyone who uses this platform to subvert that effort with inflammatory rhetoric, baseless assertions and hateful speech. Our common commitment must be to focus on the real problems of racism and intolerance," he said.

The Durban event was marked by wrangling about Middle Eastern and African demands for reparations for slavery, and attempts by Islamic countries to brand Israel as racist. 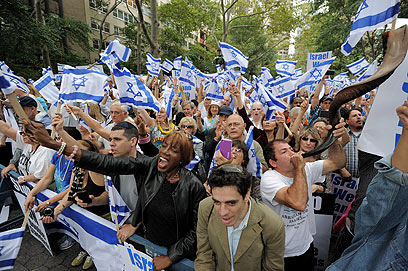 Israel and Canada were the first nations to withdraw from the event, followed by Holland, the Czech Republic, Italy, Australia, New-Zealand, Germany, Bulgaria, and in recent days Britain, France and Poland. The US announced that it would boycott the conference three months ago in light of the fact that in recent years, a series of anti-Israeli and anti-Semitic resolutions had been adopted at its gatherings.

The White House said the United States had not taken part in the event because "since its inception... the Durban process has included ugly displays of intolerance and anti-Semitism."

"We remain fully and firmly committed to upholding the human rights of all people and to combating racial discrimination, xenophobia, intolerance, anti-Semitism and bigotry," the statement said.

"We cannot -- and will not -- ignore such a willful misuse and abuse of the United Nations," Prosor said in e-mailed comments. "Many of the world's free nations are joining Israel in refusing to give legitimacy to this year's Durban Commemoration. Fourteen nations are boycotting the event outright. This is a powerful message."

The Durban conference "and the anti-Semitic atmosphere in which it was held was a particularly unpleasant and divisive chapter in the UN's history," British Foreign Secretary William Hague said in a statement this month. "It is not an event that should be celebrated."

To coincide with Durban III, several groups staged counter events. The Hudson Institute held a gathering near the UN building, titled, "The Perils of Global Intolerance: The United Nations and Durban III".

Prosor opened the event, saying, "One does not have to be a human rights activist or a Harvard law professor to understand that the Durban conference is tainted with racism it is supposed to fight." Prosor stated with cynicism that the Durban conference includes speakers "who serve as an example of tolerance like Ahmadinejad." He accused the UN of "perpetuating a legacy of racism which is a contagious disease." UN Watch, which was established to counter the Geneva-based Human Rights Council, also held an alternative event in front of the UN headquarters. UN Watch director Hillel Neuer stressed that efforts to silence the organization, which has exposed the hypocrisy of the world's worst tyrants, will not prevail.

"We presented the most famous victims of the Iranians, Syrians, Sudanese, Chinese, North Koreans who have been incarcerated, repressed and subjected to torture, and provided them with a worldwide stage to hear their voices," he said.