Bill Clinton: Netanyahu to blame for failure of peace process

Yearning for leaders of the past, former US President says 'two great tragedies in modern Middle Eastern politics were Rabin's assassination and Sharon's stroke'

NEW YORK - Former US President Bill Clinton is blaming the failure of the peace process with the Palestinians on Prime Minister Benjamin Netanyahu.

Yearning for leaders of the past, Clinton said, "The two great tragedies in modern Middle Eastern politics, which make you wonder if God wants Middle East peace or not, were Rabin's assassination and Sharon's stroke." 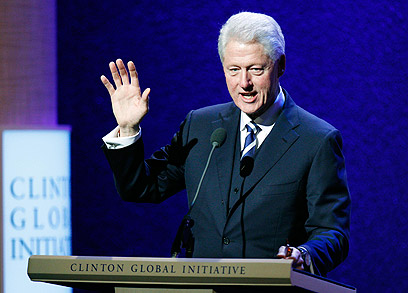 In a roundtable with bloggers Thursday on the sidelines of the Clinton Global Initiative in New York, Clinton added, "The Israelis always wanted two things that once it turned out they had, it didn't seem so appealing to Mr. Netanyahu.

According to Clinton, "(Palestinian leaders) have explicitly said on more than one occasion that if Netanyahu put up the deal that was offered to them before -- my deal -- that they would take it," referring to the 2000 Camp David deal that was rejected by Yasser Arafat.

"For reasons that even after all these years I still don't know for sure, Arafat turned down the deal I put together that Barak accepted," he said. "But they also had an Israeli government that was willing to give them East Jerusalem as the capital of the new state of Palestine."

Clinton spoke highly of the Saudi initiative, saying, "The King of Saudi Arabia started lining up all the Arab countries to say to the Israelis, ‘if you work it out with the Palestinians ... we will give you immediately not only recognition but a political, economic, and security partnership,'" Clinton said. "This is huge.... It's a heck of a deal.

"Now that they have those things, they don't seem so important to this current Israeli government, partly because it's a different country," said Clinton. "In the interim, you've had all these immigrants coming in from the former Soviet Union, and they have no history in Israel proper, so the traditional claims of the Palestinians have less weight with them."

According to Clinton, "The most pro-peace Israelis are the Arabs; second the Sabras, the Jewish Israelis that were born there; third, the Ashkenazi of long-standing, the European Jews who came there around the time of Israel's founding.

"The most anti-peace are the ultra-religious, who believe they're supposed to keep Judea and Samaria, and the settler groups, and what you might call the territorialists, the people who just showed up lately and they're not encumbered by the historical record," he said.

"That's what happened. Every American needs to know this. That's how we got to where we are," Clinton noted. "The real cynics believe that the Netanyahu's government's continued call for negotiations over borders and such means that he's just not going to give up the West Bank."

One hit after another

Meanwhile, the hits just keep on coming for Netanyahu. An editorial published on Friday in the New York Times crowns Netanyahu as the person responsible for the diplomatic impasse that led to the Palestinian Authority's UN statehood bid.

Netanyahu "refuses to make any serious compromises for peace. He appears far more concerned about his own political survival than his country’s increasing isolation or the threat of renewed violence in the West Bank and all around Israel’s borders," the editorial claimed.

The editorial opens with a description of Obama's promising speech from last year's UN General Assembly and compares it with this year's speech, one that focused on lowering expectations.

In contrast, the New York Times writes that Palestinian President Mahmoud Abbas, who is "understandably frustrated" over being put in a place where he has to "force a process that holds high risks for him as well.

"The bid to the United Nations is hugely popular among Palestinians. But he may find it hard to contain their disappointment when it becomes clear that maneuvering in New York cannot deliver a state on the ground."

The writer also expresses disappointment with President Obama for promising "confidence building measures" but missing out on the bigger picture: "We are sure there can be no solution without strong American leadership."

According to the editorial, the US and its partners in the Quartet will now have to push the Israelis and the Palestinians and present a negotiation plan and time table to the UN Security Council: "There is no mystery to what a final deal would look like, just a lack of political courage to push it to the end," the paper stated.