Palestinian Authority President Mahmoud Abbas asked the United Nations on Friday to recognize a state for his people, accusing Israel of engaging in ethnic cleansing in his United Nations speech.

“Israel issues building permits to settlers so they can build in occupied Jerusalem, while it keeps confiscating lands in eastern Jerusalem and driving away Palestinians from their ancestral lands,” he said in his address.

“Now, after the Arab springs emphasized their desire for liberty, it’s time for a Palestinian spring – the moment of independence,” he said. "I do not believe that anyone with a shred of conscience can reject our application for a full membership in the United Nations and our admission as an independent state," Abbas told the General Assembly, which gave him a standing ovation.

"Our people will continue their popular, peaceful resistance," Abbas declared, while slamming Israel's settlement policy. "This (settlement) policy will destroy the chances of achieving a two-state solution and ... threatens to undermine the structure of the Palestinian National Authority and even end its existence. 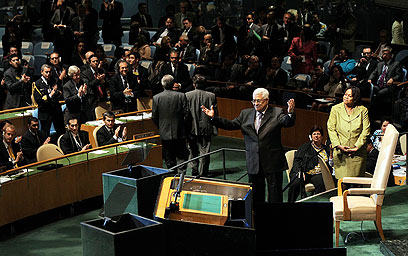 Abbas said that the Palestinians "extend our hands to the Israeli government and the Israeli people."

Shortly before his speech, the PA leader handed UN Secretary-General Ban Ki-moon a letter requesting full UN membership, which the Security Council must consider - although this may take some time.

Israel’s Foreign Minister, Avigdor Lieberman, walked out in protest during Abbas’ address. He later told Ynet that the Palestinian leader delivered a “speech of incitement” that included “harsh threats.” Prime Minister Benjamin Netanyahu was not present during Abbas’ speech to begin with.

Abbas: No to Jewish state

On Friday afternoon, Abbas said he was adamant about not recognizing Israel as the Jewish state.

"They talk to us about the Jewish state, but I respond to them with a final answer: We shall not recognize a Jewish state," Abbas said in a meeting with some 200 senior representatives of the Palestinian community in the US, shortly before taking the podium and delivering a speech at the United Nations General Assembly.

The Palestinian leader, who appeared fatigued, shared with his audience the global pressures exerted on him in an effort to prevent him from presenting the PA's statehood bid at the Security Council. "We are withstanding these pressures, and I'm telling you that I am going to the Security Council and will never change my mind, regardless of the pressure," he said.

"The American administration did everything possible so that we don't approach the UN, yet we are continuing with this important move," Abbas said, adding that peace talks with Israel are facing an impasse and presenting his conditions for the resumption of negotiations. 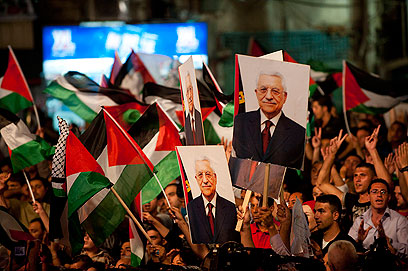 "We are saying once again that without Netanyahu's declaration that he recognizes the state of Palestine within the 1967, as well as a declaration on and implementation of a settlement freeze, we shall not return to negotiations and we shall not allow the presence of settlers and an occupation army in Palestine," he said.  Meanwhile, Hamas said Friday that Palestinians should liberate their land, not beg for recognition at the United Nations, firmly rejecting President Abbas' quest for statehood. Speaking hours before Abbas was due to ask formally that the UN recognize a Palestinian state, senior Hamas leader Ismail Haniyeh said this would not bring independence.

"Our Palestinian people do not beg for a state. ...States are not built upon UN resolutions. States liberate their land and establish their entities," Haniyeh said.