Palestinians take to streets to cheer on UN bid

Thousands of jubilant, flag-waving Palestinians, watching on outdoor screens across West Bank, cheered Abbas as he submitted his historic request for recognition

Thousands of jubilant, flag-waving Palestinians, watching on outdoor screens across the West Bank, cheered their president on Friday as he submitted his historic request for recognition of a state of Palestine to the United Nations.

Mahmoud Abbas' defiant stance, pushing for UN recognition over strong objections from the US and Israel, has struck a chord with Palestinians increasingly disillusioned after nearly two decades of failed efforts to bring them independence.

More on the showdown in the UN: 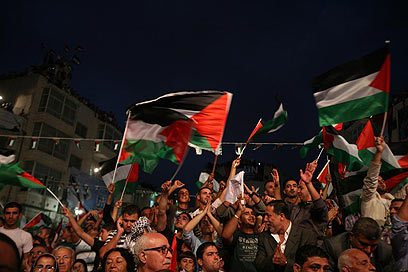 At the UN General Assembly, Abbas' announcement was met by a standing ovation, a stirring sight for Palestinians who felt their plight had largely been forgotten.

In the city of Nablus, thousands packed into the main square, decorated with large Palestinian flags and posters of Abbas. Fathers came with children on their shoulders. Young men climbed onto surrounding rooftops. Elderly women were assisted by younger relatives.

The crowd cheered throughout the speech, roaring ecstatically when Abbas, known as Abu Mazen, announced from the podium of the General Assembly that he had submitted the request for full UN membership.

"We are here celebrating because Abu Mazen is making us a state. We want to have our own state, like any other country. All countries must support us," said Reem al-Masri, a 30-year-old schoolteacher, who lost a brother and two cousins in fighting with Israel during the second Palestinian uprising against occupation a decade ago.

"This is our land. We're going to be strong in it until it's liberated. When you have a state all your dreams come true," she said. 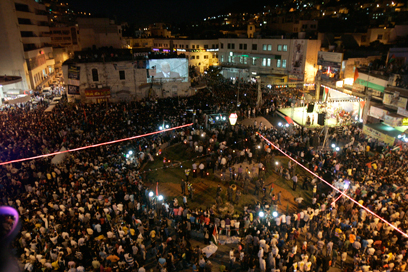 In Ramallah, the seat of Abbas' government, a crowd of several thousand cheered, whistled and chanted "God is great" during Abbas' speech. Fuad Ashilla, 50, said it's important Abbas not succumb to American pressure to withdraw his request.

Gaza's Hamas prime minister, Ismail Haniyeh, said Friday that Abbas was giving up Palestinian rights by seeking recognition for a state in the pre-1967 borders.

On Friday evening, several Hamas officials watched the speech at an office in Gaza City, taking notes and exchanging text messages with leaders of the movement in Syria and Lebanon.

"The Palestinian people do not beg the world for a state, and the state can't be created through decisions and initiatives," Haniyeh said. "States liberate their land first and then the political body can be established." 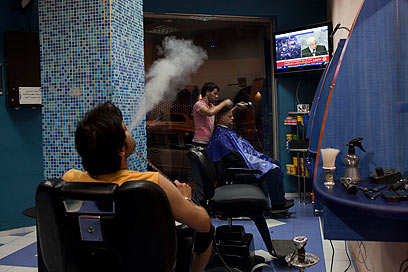 The joy over Abbas' move was marred by violence just hours earlier. Near the West Bank village of Qusra, Israeli soldiers shot dead a Palestinian man during rock-throwing clashes between the villagers and Israeli settlers, according to witnesses and military accounts.

At Qalandiya, a major Israeli checkpoint between the West Bank and Jerusalem, IDF troops fired tear gas to disperse Palestinian stone-throwers. The confrontations lasted several hours, and by late afternoon, medics said some 70 Palestinians had been injured by rubber-coated steel pellets or suffered tear gas inhalation.

In the West Bank village of Nabi Saleh, demonstrators carried a chair painted in the UN's signature blue to symbolize the quest for recognition. They burned Israeli flags and posters of President Barack Obama, and threw stones before being enveloped by tear gas fired by Israeli troops. Clashes were also reported in the nearby village of Bilin.