Lieberman at the UN
Photo: AP

Lieberman: Abbas ran away so he won't have to negotiate

Foreign minister slams Palestinians for making up excuses; warns 'any unilateral step will without a doubt bring an Israeli reaction'

"Mahmoud Abbas ran away immediately after his UN address so, God forbid, he won't have to negotiate," Foreign Minister Avigdor Lieberman said on Sunday morning.

According to Lieberman, who spoke with Army Radio, "The Palestinians are making up excuses all the time why not to negotiate. If someone seeks excuses, he will always find them. Abbas continues to demand the right of return and even if he establishes a Palestinian state in Judea and Samaria, he would seek to send all the refugees into Israeli territory." 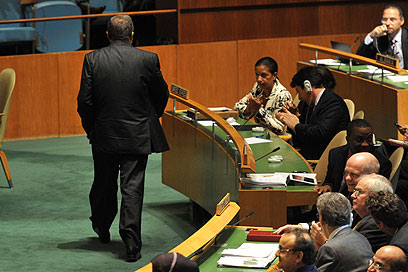 The foreign minister walked out during Abbas' speech, claiming it was a “speech of incitement” that included “harsh threats.”

Lieberman also warned that there would be "tough repercussions" if the United Nations approved the Palestinian application for statehood.

He did not spell out what action Israel would take if the world body backed the application made on Friday by Abbas at the UN General Assembly.

In the past, Lieberman has suggested severing ties with Abbas' Palestinian Authority if it wins recognition without a peace deal with Israel.

"If the Palestinians will indeed pass a one-sided resolution if not in the Security Council then the General Assembly, that would bring us to an altogether new situation and this would have repercussions, tough repercussions," the foreign minister said.

According to Lieberman, "Any unilateral step will without a doubt bring an Israeli reaction."

The Quartet of Middle East power brokers, made up of the United States, the European Union, Russia and UN, proposed a new plan on Friday, urging Israel and the Palestinians to meet within a month and set a new agenda for talks.

The Quartet proposal calls for deadline at the end of 2012 for achieving a peace deal that would result in Palestinian statehood alongside Israel.

Lieberman also welcomed the idea. "We must express our gratitude to the US for helping us deal with the events surrounding the Cairo embassy and the speech at the UN. That's why we should agree to the Quartet's proposal despite all the reservations," he said.

Netanyahu is slated to convene the forum of to eight government ministers on Monday. Abbas has said he would discuss the ideas with Palestine Liberation Organization leaders and other senior Palestinian officials upon his return to Ramallah.