Turkish intelligence officials have submitted to the state prosecution a list of 174 Israelis, mostly soldiers, who were involved in the 2010 raid on the Gaza-bound Mavi Marmara ship, the Turkish newspaper Sabah reported Monday.

Turkish newspaper Zaman went a step further and reported on its website that Ankara had also operated intelligence agents inside Israel to confirm the soldiers' identities. 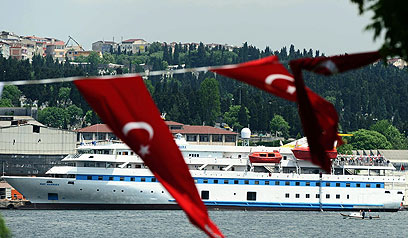 The Turkish government denies ever asking its National Intelligence Organization (MIT) to confirm the identities of Israeli commandos involved in the raid. Istanbul's deputy prosecutor said that a lawyer for the IHH submitted a list of soldiers' names to his office and said it will be examined.

The Turkel Commission investigating the events of the 2010 raid on the Mavi Marmara has asked the Military Advocate General for materials regarding criminal records opened following the flotilla.

It has also requested to view files concerning possible violations of laws of war involving the deaths or injuries of citizens. The materials will be examined by Sukkot. Last month, the Military Advocate General released a report concerning six floti8lla events. The Turkel Commission could not rule on the cases.

According to the report in the Sabah newspaper, the Israelis were identified from photographs and various media sources.

"Almost all of the Israeli soldiers who killed nine Turkish citizens and injured 30 others have been identified," the report claimed.

It was stated that Israel's government has not responded to the Turkish Justice Ministry's demand to release a list of the individuals who took part in the operation, prompting the intelligence officials to pour over records of the raid. Facebook and Twitter were used later in the hunt for information.

The fact-finding team examined the names of the commandos of Shayetet 13 – the Navy unit that took over the Gaza-bound vessel – and matched them up with the numerous photos used in the media.

Furthermore, the officials reviewed correspondence written by soldiers whom they believed took part in the raid in order to confirm their participation. Names submitted by the IHH movement, which organized the flotilla, were used in the search as well.

According to the report, the Turkish prosecution intends to request the Israeli authorities to verify whether the people on the list, which includes 140 photos of 174 Israelis who directly or indirectly participated in the raid, were indeed ivolved.

Officials who allegedly contributed to the decision and issued the order to stop the Mavi Marmara, including Foreign Minister Avigdor Lieberman and Defense Minister Ehud Barak, made it to the top of the list as well.

"All of the Israeli Cabinet ministers were responsible for the order," the report read.

The list also includes former IDF Chief of Staff Gabi Ashkenazi, former Israel Navy Commander Eliezer Marom, former Military Intelligence chief Amos Yadlin and a variety of other high- and low-ranking officers. Moreover, it includes 10 photographs of soldiers who are yet to be identified.