In interview with Time magazine Turkish PM says Israeli-Palestinian conflict would have been resolved long ago if UN had imposed sanctions on Israel; says Israeli gov't not honest about flotilla

Turkish Prime Minister Recep Tayyip Erdogan is advocating imposing UN sanctions on Israel. In an interview with Time magazine the Turkish leader said that had prospective UN sanctions been imposed on Israel "the Palestine-Israel conflict would have been resolved a long time ago."

Appearing at the UN General Assembly Erdogan claimed that the US approach towards the Middle East peace process had failed. Asked what he would have done differently, Erdogan said: "Do we really want to resolve this issue or not? Unfortunately, I do not even see traces of this within the Quartet. Because if the Quartet was so willing to resolve this issue, they would have imposed certain issues on Israel today.

"Until today, the UN Security Council has issued more than 89 resolutions on prospective sanctions related to Israel, but they've never been executed. And furthermore, there were about 200 resolutions issued by the General Assembly and neither have those been complied with." 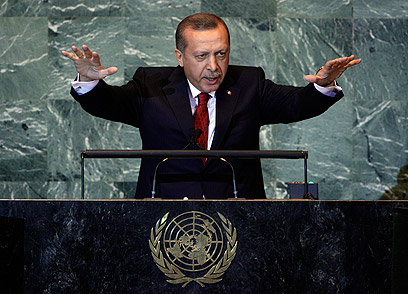 Erdogan addresses General Assembly (Photo: AP)
He further added: "One might wonder why no sanctions have been imposed on Israel. When it's Iran in question, you impose sanctions. Similarly with Sudan. What happens with Israel then?" Erdogan also criticized the make-up of the Security Council: "What's the deal with these permanent seat holding members in the Security Council? They should be eliminated. The entire world is literally a slave to the decisions of these five permanent seat holders." On the issue of the diplomatic crisis with Israel, Erdogan blamed Israel for "victimizing the positive relations of two countries with (its 2010 raid) on the Mavi Marmara." The Turkish premier also stressed relations between Ankara and Jerusalem will never become normalized until Israel apologizes for the deaths of nine Turkish citizens, pays compensation to the families of the victims and lifts the Gaza blockade. He claimed the flotillas were carrying nothing but humanitarian aid and mentioned that one of the casualties was an American citizen of Turkish decent.

"And right now the Israeli Prime Minister still alleges that the flotillas were actually loaded with weapons. Had they possessed the weapons that were alleged, why didn't they fire back? There are reports issued by both the UN Security Council and UN agencies in Geneva about this incident and you never see the slightest trace that the flotillas were carrying guns. The Israeli government is not being honest at all. "

Addressing the Palestinian bid for statehood, Erdogan said that first and foremost the Security Council must accept the proposal. He added: "Israel first seems to have accepted going back to the borders of 1967, but somehow seemed to have got distanced from this ideal. They need to get closer back to it. "Through TIME, I'd like to make a call out to humanity: (the Palestinians) are there to exist. They are not there to be condemned to struggle in an open-air penitentiary. Israel's cruelty in that regard cannot be continued any longer. "