US actor Sean Penn joined thousands of Egyptian activists who packed downtown Cairo on Friday demanding that military rulers speed up the transfer of power to civilians and end emergency laws once used by Hosni Mubarak against his opponents.

Local media said Penn, holding an Egyptian flag, walked with Egyptian actor Khaled el-Nabawi in Tahrir Square, where Egyptians demonstrated in what they dubbed as "Reclaiming the Revolution" day amid growing discontent over the way military rulers had managed the transitional period.

"The world is inspired by the call for freedom by the courageous revolution of Egypt for its freedom," Penn said in remarks carried by Al-Ahram newspaper's online page.

"Clearly that is not a completion overnight, there are still struggles forward, there are constitutional issues, there is ... a transition of power from the military to the people," he added. 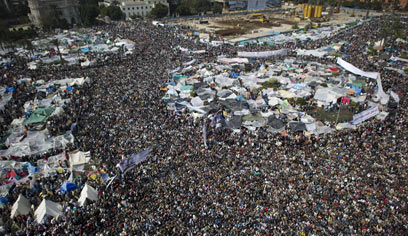 Nabawi said he had invited the Oscar-winning Penn to visit Egypt as part of efforts to demonstrate that Egypt was a safe place to visit despite the uprising. "We want to show that Egypt is safe," Nabawi said.

The military council has announced that parliamentary elections will start on November 28 with a mixed system of proportional representation and individual lists. Most political groups fear the system will allow Mubarak supporters to return to office.

"This week is different because we feel that our revolution has been stolen from us," said Yasser Fouad, an unemployed 38-year-old, his voice drowned out by loudspeakers urging people to ensure the protest remained peaceful.

"None of our demands have been achieved. We want them to hand over power immediately through elections," Fouad said.

Mahmoud Sayyid Saif, 58, who works at the Health Ministry, said Egyptians would no longer put up with inaction. "It has been seven months, and nothing has been achieved," he said.

Hundreds of youths later tried to march towards the military council's headquarters but were blocked by military police who forced them to return back to Tahrir Square, witnesses said. The march caused severe traffic jams but there were no reports of injuries.

Security forces stay away from square

The ruling military council has warned demonstrators against attacking public facilities, but soldiers and security forces stayed away from the square.

The Muslim Brotherhood, Egypt's largest political force, said on its website that it would not join the protest. But social media websites said many youths vowed to defy the orders from the group's leadership and join the protest.

Egyptians have grown more vocal in criticizing the military council's handling of the transitional period. Six presidential hopefuls on Thursday issued a statement demanding that the council set March as the deadline for handing over power.

They also declared that the state of emergency legally expired on Friday. The military council has said it will stay in force until next year.

They also demanded reactivation of a law dating back to the 1950s that criminalizes abuse of office, to make it possible to try remnants of the Mubarak regime and "render them incapable of sneaking back to the seats of the legislative authority".

Some 60 political parties issued a joint statement earlier this week with similar demands. They also gave the military council until Sunday to amend election laws to allow political parties to also compete for seats allocated to individuals.

Egypt's Al-Akhbar newspaper reported on Friday that the government was considering the request.

Thousands of Egyptians also marched in the Mediterranean city of Alexandria and in the city of Suez. Witnesses said the protests were peaceful.