Grand Ayatollah Khamenei stresses Tehran is opposed to two-state solution during conference endorsing Palestinian intifada; calls for referendum in historical Palestine to include all refugees

Iranian Supreme Leader Grand Ayatollah Seyyed Ali Khamenei said Saturday that Tehran believes that the Palestinian issue should be resolved by means of a referendum among all Palestinians.

The aggressiveness of the West toward the Palestinians must end, he said, but not by drowning "the immigrant Jews" or imposing international rule. Khamenei also stressed that Iran is against the two-state solution.

Speaking at a Tehran conference endorsing a Palestinian intifada, the Iranian spiritual leader said: "We do not seek to drown the immigrant Jews in the sea, nor impose UN rule. We propose holding a referendum among all Palestinians."

He warned that "should the West continue its historic aggressiveness towards the Palestinians it can expect greater blows in the foreseeable future." 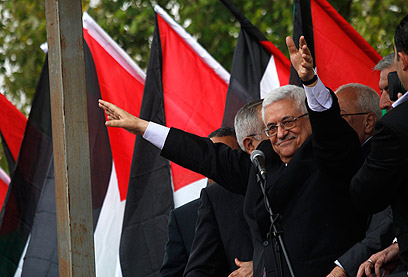 Abbas returns to Ramallah from New York (Photo: Reuters)
Khamenei added that the Zionist regime is threatened "not by Iranian missiles or the resistance, but by the bold wishes of men and women of the countries of Islam who will not tolerate dictatorship any longer." Iran believes that a referendum in the historic land of Palestine must include all refugees, thereby wiping off the Jewish majority. Tehran has found itself in an awkward position in the wake of the Palestinian bid for recognition - endorsing it would suggest recognition of a state on parts of historic Palestine, whereas opposition would bolster the Israel-US stance. Iranian President Mahmoud Ahmadinejad solved the dilemma by announcing in New York that Tehran supports the PA bid as a stage towards the liberation of all of Palestine.

'No alternative but resistance'

Mashaal said at the conference: "Our position is that of resistance until the Zionist regime is defeated."

"We hope that the Arab states realize there is no other alternative but pursuing the path of  resistance. A Palestinian state bears symbolic significance and this hinders the Zionist regime and the US. There is widespread international consensus and this shows their ugly faces.

"But what next? Must we go on with negotiations as the only alternative? Even if we decide to be friends at the UN, the land will still be occupied and full of settlements. And that is why the question is how do we liberate the lands and then establish a state?"