The October 2000 riots which saw 13 Arab citizens killed are the focus of a new controversy. Many teachers and parents from the Arab sector are furious with the Education Ministry for banning all political activity related to the events. Some parents have even decided not to send their kids to school in protest.

Previous Anniversary
'Arabs won't forget October 2000 killings'
Sharon Roffe-Ofir
Family members of 13 Arab Israelis killed by police visit graves of loved ones. Father of one of victims says, 'Time has come to switch barrel of gun with bouquet of flowers,' criticizes that responsible parties not identified. 'If it were Jews, would case have been closed?' he wonders
'Arabs won't forget October 2000 killings'

"It's unacceptable that schools at the Jewish sector are allowed to teach students about Nazism while we are banned from talking about the martyrs who died in the October events," one parent told Ynet.

A teacher at a Wadi Ara high school, said: "We received warning from the school headmaster not to discuss the October events with the students and we shall honor that request despite our opposition. The Education Ministry wants to silence us and treats us as though it's doing us a favor by employing us."

A letter by the Education Ministry addressed to school headmasters stated, "According to procedure, all political activity inside schools such as conferences, lectures, rallies or any other activity which aism to incite or align towards one political line, is banned." Head of a Wadi Ara high school Parent-Teacher Association Hussein Khalaila said, "It's unacceptable that the Education Ministry slight the Arab population in the State of Israel. If we are banned from acting we might as well put all the schools on strike."

Meanwhile, Assam Umar, head of the National Parent-Teacher Association called on all schools in the Arab sector not to adhere to the demands. 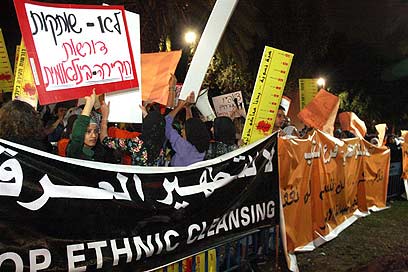 Suhir Badran, a student from Sakhnin claimed that hundreds of her fellow students have decided not to attend school and participate in activity on the ground. "We deserve to learn about the Arab sector's history," she said. "We are disappointed that the Education Ministry does not honor the memory of the martyrs."

MK Hanin Zoabi said in response: "The Education Ministry is breaking the law. Teaching about October 2000 is teaching history and facts. Expressing one's opinion is one of man's basic rights and is the duty of every school." She called on the school headmasters to return the letters.

"The Ministry which behaves like the mind police and harbors the silly notion it can cultivate a submissive generation is wrong big time. It only harbors awareness of a generation which needs to fight for its rights and identity."