Thousands of Israeli-Arabs gathered in the town of Sakhnin, in the Lower Galilee, on Saturday, for a protest march marking the 11th anniversary of the 2000 October Riots.

The riots, which broke out after then-Prime Minister Ariel Sharon visited Temple Mount, eventually claimed the lives of 13 people.

The march was organized by the Higher Arab Monitoring Committee and the Arab sector's leadership.

The protesters hoisted Palestinian, Syrian and Turkish flags and banners reading "We treasure the blood of the shahids," "We will never forgive the killers" and "The Israeli government wants to humiliate us." 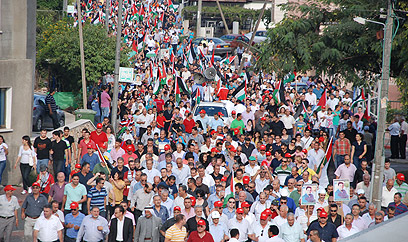 Thousands protest (Photo: Sami Hamid, Zoom Out Productions)
Large police forces have deployed in Sakhnin to maintain the order. MK Ahmad Tibi (United Arab List-Ta'al) told Ynet that "the most disconcerting thing is that the policemen who killed, who committed murder, were never tried, even thought they should have paid the price. "Unfortunately, the State of Israel has betrayed its citizens and favored the killers over the victims; all in the name of hatred and racism and the sense of authority over them. "Racism is now the norm," he added. "Even in the Knesset – not a week goes by without a racist law. We will continue to cry out until we are heard." A similar march was also held in Nazareth. MK Hanin Zoabi (Balad) participated in the march: "The Israeli Police killed 13 Palestinian who were citizens, meaning the (Israeli) citizenship does not protect us," she told Ynet. "The State sees us as enemies because we are Palestinians and we don’t deny our identity. This country views any non-Zionist affiliation as a threat, even if we were born here… It sees our nationality as a strategic, racist threat. "The killers were never punished and we insist that they should be punished," she continued. "This country conspires against us and thinks it can shut up. There will only be a more dedicated fight for our rights and the unmasking of the absurd gap between Zionism and democracy."