Dozens of settlers clashed left-wing protesters outside Anathoth settlement, near Jerusalem on Friday,  injuring seven and leading to the arrest of three others. Settlers claimed a child was injured by stones cast at her.

It all started when left-wing activists arrived to Anathoth to support Arab-Israeli activist Yassin Raffali, an east Jerusalem resident who decided to set up a tent inside the settlement in protest.

The situation heated up soon thereafter, as right-wing activists were caught on tape beating up the protesters, even leaving one man lying on the road, bleeding.

According to Anathoth secretariat what ignited the clash was the tearing of Israeli flags and stones being cast as kids passing by, allegedly injuring one child.

"In the midst of the holiday and as an act intended to stir up a brawl, dozens of anarchist, extremists activists joined him (Raffali) and entered the settlement. They began casting stones at kids and parents riding their bicycles. "Afterwards the provocateurs began to wave Palestinian flags," claimed an Anathoth secretariat official. In a phone a call obtained by Ynet, the security chief of Anathoth warned the demonstrators that some of the settlers were planning to come and physically injure them. "The Border Guard is here not because of the flags. There are a few guys here that want to come up and kick your ass. To come there and hit all of you," he told protesters. 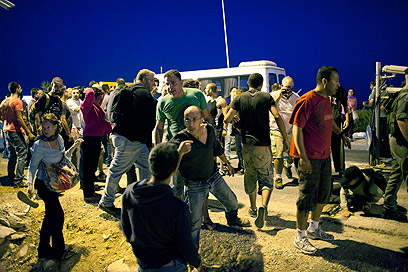 Photo: Activestills
Violent clashes continued as leftist activists returned to the settlement at night time to protest against the events of the morning. They blocked off the entrance to Anathoth after not being allowed in. In response, some 150 settlers confronted the activists, injuring four and puncturing their car tires.

Both sides presented conflicting tales as to the chain of events that night. The left-wing protesters claimed they were brutally attacked, as the gate to the settlement was opened and the settlers, lead by the security officer, began beating them up.

"We backed away from the gate… but more and more people came out and attacked us, causing damage to our vehicles. Some of them carried rubber clubs. Someone even carried a screwdriver. They grabbed people and lay them down on the floor, and beat them up. This continued for about an hour, as policemen stood by and did nothing," claimed co-founder of the Solidarity Movement, Assaf Sharon. However the settlers tell a different story: "Those anarchists returned in masses to the settlement to hold an illegal and violent protest outside the settlement's gates. They blocked the entrance, attacked the residents' cars." The Judea and Samaria District Police opened an official investigation into the matter. According to them, it is yet to be determined whether policemen were involved in the incident.