PM's office announces Israel accepts call to resume peace talks with no preconditions, notes reservations will be raised during negotiations

Prime Minister Benjamin Netanyahu on Sunday accepted the Quartet's proposal for the resumption of peace negotiations and a final status agreement within one year. Netanyahu made the decision after meeting with the eight-minister forum.

A statement by the Prime Minister's Office said: "Israel welcomes the Quartet's call to hold direct talks with no preconditions with the Palestinian Authority as previously proposed by US President Barack Obama and Prime Minister Benjamin Netanyahu. Though Israel has a number of reservations which it will raise during negotiations, it calls on the PA to do the same and enter into direct talks without delay."

Since Netanyahu returned from New York, Israeli state officials have spoken favorably of the Quartet's stance which is being seen as pro-Israel. Israel has now officially accepted the call to resume negotiations. 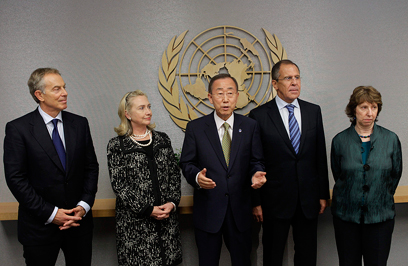 Netanyahu's spokesman Roni Sofer said: "Immediately after the Quartet's announcement, the prime minister declared that Israel accepts the concept primarily because it concerns direct talks with the Palestinians which has been the prime minister's aim since his election.

"Solutions can be reached only through negotiations, even if they are tough. Nevertheless, the prime minister and the government have reservations which will be raised during the talks. The prime minister is completely aligned with President Obama, the US administration and Israel's many friends in Europe and the world."

Washington welcomed Israel's decision, a statement issued by State Department spokeswoman Victoria Nuland read: "We welcome the Israeli government's announcement today expressing readiness to resume negotiations with the Palestinians, as called for by the Quartet. The Palestinians expressed support for the Quartet approach on September 29.

"The US once again calls on both parties to resume negotiations without preconditions, on the timetable proposed by the Quartet, as the best means to advance their interests, resolve their differences, and fulfill the President's two-state vision."

Over the weekend, the Palestinians expressed opposition to the Quartet's "vague statement" and stressed they will not accept lengthy negotiations. Fatah official Nabil Shaath said: "The international community must take harsh and clear steps to point out the terms of negotiations and take harsh steps against those who violate them; but we, the Palestinians, are the only ones being punished when we break the terms. "