Syrian troops going house to house have detained more than 3,000 people in the past three days in a rebellious town that government forces recently retook in some of the worst fighting since the country's uprising began six months ago, an activist said Monday.

In the rebellious central town of Rastan, which the government retook on Saturday, an activist told The Associated Press by telephone that security forces have detained more than 3,000 residents since Saturday. He said the detainees were being held at a cement factory, as well as some schools and the Sports Club, a massive four-story compound.

"Ten of my relatives have been detained," said the activist, who asked that he be identified by his first name, Hassan. He said was he speaking from hiding in Rastan. 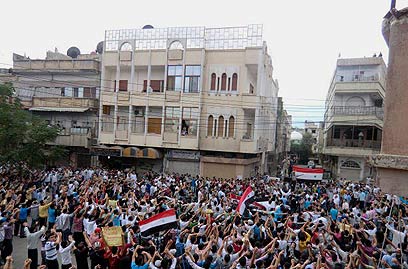 "The situation in the town is miserable," he said, adding that the town of some 70,000 people was heavily bombed for five days starting Tuesday when the army launched an offensive.

Syrian activists say the fighting in Rastan pitted the Syrian military against hundreds of army defectors who sided with the anti-regime protesters, who are calling for Assad's ouster.

Also, a member of Syria's outgoing parliament dismissed a broad-based national council set up by the opposition, saying it will not be able to overthrow President Bashar Assad's regime. Khaled Abboud told The AP that those who announced the formation of the council in Istanbul a day earlier are "deluding themselves."

Syrian dissidents met in Istanbul Sunday and formally established a national council designed to overthrow Assad's regime, which they accused of pushing the country to the brink of civil war. The council appeared to be the most serious step yet to unify a deeply fragmented dissident movement.

Abboud dismissed the opposition move, saying: "It's a dream that will never come true."

The clashes in Rastan were among the worst the country has seen since the uprising began in mid-March.

The uprising began in mid-March amid a wave of anti-government protests in the Arab world that have so far toppled autocrats in Tunisia, Egypt and Libya. Assad has reacted with deadly force that the United Nations estimates has left some 2,700 People dead.