Residents from the village of Tuba Zangaria where a mosque was torched on Monday in suspected "price tag" actions, set fire to the local council building on Monday night and caused damages to the local youth cultural center and village clinic.

The suspects threw rocks at police forces that arrived at the scene. In response, the police fired tear gas and used crowd dispersal measures.

The council building was heavily damaged by the fire. The rioters also shattered windows, broke doors and damaged property at the cultural center and the local clinic. 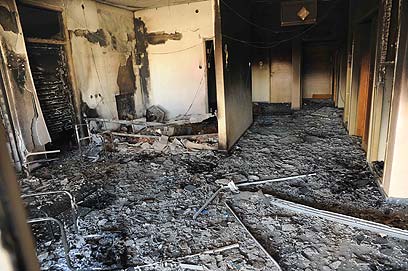 Northern District Commander Roni Atiyah was present with the police forces at the scene overnight and ordered to maintain the heightened state of alert that was declared on Monday after the torching of the mosque.

On Monday evening, Tuba Zangaria youths hurled stones at police officers patrolling the village and blocked off the entrance to the village. Police forces deployed at the scene and had to use crowd-control measures to disperse the riot. 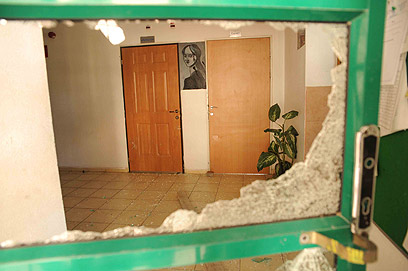 Earlier, around 50 protesters rallied in Rosh Pina against the racism and extremism they claim lead to the torching of the mosque. The demonstrators chanted "Jews and Arabs refuse to be enemies" and "Price Tag – we all pay a price."

Meanwhile, Bedouin villages in the north have declared a general strike beginning Tuesday, after unknown assailants sprayed the words "price tag", "revenge" and "Palmer" – the last name of the father and son killed in a terror attack in Kiryat Arba last month – at the scene overnight,

President Shimon Peres, accompanied by chief rabbis Shlomo Moshe Amar and Yona Metzger and Muslim as well as Christian and Druze leaders, visited the site on Monday: "I am appalled by what happened here. Shocked to my core. This isn’t just against the law, it goes against the Jewish religion and against morals," he said.

"Seeing what happened here fills me with shame," Peres continued. "We will not accept it. There's isn’t a single Israel who isn’t ashamed by this.

"We all want to live in this country as citizens with equal rights, each of us according to their own faith. It is our duty to protect these places," the president said.

following the arson. the police announced it will bolster its presence around mosques and other Muslim holy sites nationwide for fear that they could become targets of similar hostile "price tag" acts.

The act has been denounced by leaders across the political spectrum. The Prime Minister's Office released a statement saying that PM Netanyahu was "outraged when he saw the photos and said the act went against the State of Israel's values. Freedom of religion and freedom to worship are supreme values."