Kam testimony exposed: 'I tried to be a hero'

In her court testimony, released for publication at Ynet's request, Kam said she had stolen 2,000 classified documents because of 'stupid idea' that came to her head to take documents from general's office, contradicting her Shin Bet testimony that she did it because of ideological reasons

What drove Anat Kam to passing on classified documents: Ideology or simply an "act of stupidity?" In her testimony before the Tel Aviv District Court, Kam said that she had stolen 2,000 military documents because towards the end of her military service, a "stupid idea" came to her head to take documents from the general's office. The reason, she claimed, was to show how the "IDF investigates its own failures". During her Shin Bet interrogation, she had claimed that she was driven by ideology but then completely changed her version in court.

The court approved Ynet and Yediot Aharonoth's request to publish her testimony after it was given a green light to do so by the Shin Bet and the State Prosecutor's Office. 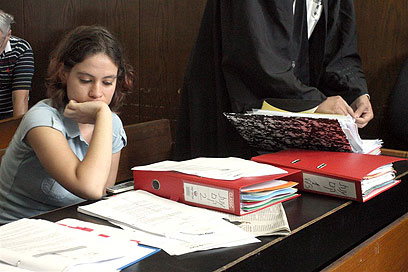 In the framework of a plea bargain, Kam was found guilty of illegally possessing classified IDF materials and passing them on to a reporter without authorization. In her testimony, Kam was asked to explain the contradictions between her Shin Bet interrogation and her court appearance. "I was less than 23-years-old, overly pretentious and it even seemed sexier to attribute such noble causes to my act, instead of going to the Shin Bet and telling them that I did something foolish," she said.

'What were you thinking?'

According to Kam, "It was an attempt to impress three men, one of whom could have been my father. I tried to get the maximum at the time in an informal atmosphere. Instead of telling them that I was a stupid girl I tried to be a hero, a freedom fighter driven by morals."

Kam added, "The things I said during the Shin Bet questioning, I see them as remarks said by a young woman – on the one hand scared and on the other trying to show as if she wasn’t, trying to play cool while being in an office with three serious, authoritative men. Part of being cool was saying that you were sorry only after you got caught."

"What were you thinking?" asked the prosecutor, to which Kam replied, "I don't have an answer to that question… It goes against every principle of abiding to the law and security I believe in. It was a stupid act that contradicts everything I think of myself."

The judges told Kam, "You are an intelligent girl. The act is not stupid." Kam replied in short, "I don't have another answer other than stupidity." 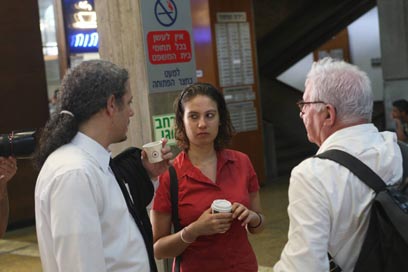 Later in her testimony, Kam spoke of a possible reason. "As part of my job, I was exposed to the investigations into the Second Lebanon War. The probes showed all kinds of failures, learning from lessons, conclusions etc. They were internal IDF probes headed by the general and the chief of staff. I thought that perhaps a day would come when the Israeli public would be entitled to know what and how the investigations into this war were conducted." "Since the war was of interest to the Israeli public for a fairly substantial amount of time, while the chief of staff and other officers left their positions because of it, I thought perhaps it could be brought to the public's attention so that it knows how the IDF investigates its failures and how it learns or fails to learn its lessons, and will know how to prepare for the next war."

'I copied it all'

Kam reveled that there was another soldier who helped her, probably without being aware of what she was doing. "I didn't think much of it. After this idea came to mind, I asked one of the soldiers in the computers department to burn the entire documents folder for me, which was on my computer."

She said that the soldier who burned the documents onto the disc did not ask questions and if she had made it difficult for her, she would probably back down from her intent.

"I don't know if I should call it spontaneity, when this thing entered my mind. I copied it all. I didn’t sort the files, I took as it was," Kam told the court. When she returned home that day, she said that she took out the disc from her bag and left it on the table in her room. "I copied it to my home computer at some point, I don't remember if it was the same day or several days later," she said.

Meanwhile, Kam completed her military service and started working in the Walla website. "The military service became a distant memory and it was less on my mind. One evening I was bored, I organized things on my computer and saw the documents. I said I would recall my army period, I looked at it but it didn’t interest me," she said.

However, the documents did not remain in her computer for long. "In the summer of 2008, I thought perhaps it was time to make use of the documents. I didn’t remember what the documents contained. It was exactly two years since the end of the war and I remembered that I had these investigations of the war."

Kam met Haaretz reporter Uri Blau, who published the story about the documents he received, at a conference in Tel Aviv. Several days later the two traveled to Jerusalem together. "During the trip, I told him that I had things that would be of interest to him," Kam said in her testimony. "I didn’t elaborate because I didn’t remember what was there, I didn’t review the documents." 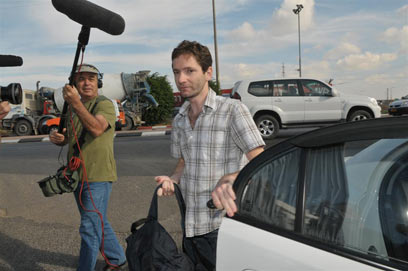 Kam said that Blau was excited by the documents. "I didn’t realize the significance he had placed on the documents." Blau told her that he was planning on focusing on the targeted assassinations subject and the two began holding phone conversations to discuss "technical matters."

After Blau ran his story that included scanned documents, Kam was not concerned that his source would be traced. "I didn’t think about it at the time. My experience as a source was limited at the time, I didn’t see the risk during the publication," she said in court.

According to Kam, "I knew that what I did was wrong and I didn’t want to get punished over it. I also asked Blau not to tell people at Haaretz that he got the documents from me."

During her testimony, Kam was asked by the prosecutor how she views her actions. "It was thoughtless and rash. It shouldn’t have been done and I regret it."

She also described how she felt after Blau's story was published. "It was perceived as something very noble and pro-human rights. I felt good that I was part of it because it suddenly got this moral aura. The moral consideration I attributed to myself during the interrogations wasn’t really there when I burned the documents because I didn’t understand the significance of what was there," she said.