An improvement in all subjects in the school year of 2010/2011 was recorded in the annual 'Meitzav' exams (school growth and efficiency indicators), the Education Ministry announced in a press conference on Tuesday.

Grades in English, mathematics and science also showed improvement for the second year in a row.

The most significant improvement was seen in the 8th grade science and technology test results – up to 541 in the 2010/2011 school year from 522 in 2009/2010. Better results were also achieved amongst 5th and 8th graders in the fields of English, mathematics and science. 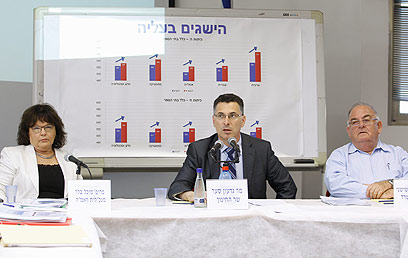 The average grade of 5th graders in mathematics went up from 526 last year to 549 this year, as English results jumped from 508 to 525. Science and technology grades improved from 524 to 532 while Hebrew exam scores showed slight improvement – rising from 521 to 528.

In addition to the reduced gaps between Jews and Arabs, the exam also showed differences between socio-economic groups among Jews. Wide gaps were observed amongst 8th grade students in the subjects of math and English: from a gap of 104 points in 2009/2010 to 114 this year in Math and from 72 to 77 in English. 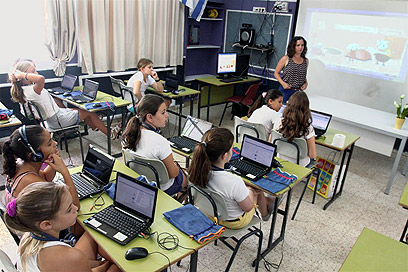 Results indicate the exact opposite amongst 5th grade students, as gaps reduced in Hebrew, English and science. However students belonging to lower socio-economic groups scored especially low in Math this year.

Education Minister Gidon Sa'ar said Tuesday that the results of the 'Meitsav' exam show a trend of improvement in the Israeli education system.

"The improvements are evident in all subjects, all age groups and all sectors and economic classes," said Sa'ar.

"According to my global view, setting goals is an effective way of achieving qualitative results in education," he added.

Sa'ar said he believes we will also see improvement in the global exam scores, which will be published in the upcoming year.

"We still have a lot of work to do and there are still socio-economic gaps affecting the students' achievements. We must work ever harder to keep this positive momentum going."