Israeli scientist Daniel Shechtman has won the 2011 Nobel Prize in chemistry, the Royal Swedish Academy of Sciences announced on Wednesday.

The Academy honored Shechtman for the discovery of "quasicrystals" – patterns in atoms which were thought impossible, adding that Shechtman's discovery in 1982 had fundamentally changed the way chemists look at solid matter.

"Contrary to the previous belief that atoms were packed inside crystals in symmetrical patterns, Shechtman showed that the atoms in a crystal could be packed in a pattern that could not be repeated," the RSAS said.

"His discovery was extremely controversial. In the course of defending his findings, he was asked to leave his research group. However, his battle eventually forced scientists to reconsider their conception of the very nature of matter," it said.

Shechtman, 70, is a distinguished professor at the Israel Institute of Technology in Haifa. Technion President Prof. Peretz Lavie congratulated Shechtman on his win.

Shechtman told journalists that he learned about the honor from the President of the Sweden Academy of Arts and Sciences.

"I was asked not to tell anyone. I only told my wife, Tzipi. After the official announcement all hell broke loose," he said. "Naturally, this is a great day for me, but it's also a great day for science." 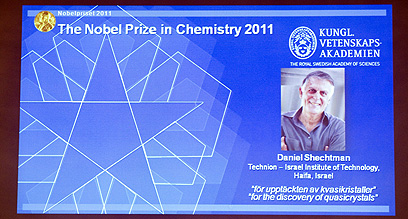 'A great day for science'

"This is a day of celebration not just for the Technion but for the entire State of Israel. We are very excited. We always knew that Prof. Shechtman's discoveries changed the face of science, and it was clear to us that he would win the desired prize at some point. We are happy that it happened this year."

Lavie described Shechtman as a "very unique scientist": "On the one hand his exceptional international status, but on the other hand he's one of the must beloved and modest people in the Technion. We heard of his win just like everyone else. The tension was high and within a few minutes the news of his win spread like wild fire," said Lavie.

Prime Minister Benjamin Netanyahu telephoned Prof. Daniel Shechtman and congratulated him on behalf of Israel's citizens for winning the 2011 Nobel Prize in Chemistry. "The award expresses our people's intellect. Every citizen in Israel is happy today and every Jew is proud," he said.

President Shimon Peres was next: "I salute you, you gave the people of Israel a wonderful gift," Peres said. "This is a great day for Haifa, a great day for the Technion. God bless all of us and thank you very much for your gift."

Education Minister Gideon Sa'ar telephoned Prof. Shechtman and congratulated him for his win: "Scientific achievements are a source of great pride for the higher education system and the State of Israel," he said. Knesset Education Committee Chairman Alex Miller congratulated Shechtman as well: "This win proves once more that the human capital is the most important strategic asset of the State of Israel. Investing in education and in qualitative and investigative higher learning not only results in economical and cultural growths but also brings great honor to Israel around the world."

The chemistry award is the third Nobel Prize to be announced this year and carries a grant of 10 million Swedish crowns ($1.45 million).

Yoav Shechtman, Prof. Daniel Shechtman's son told Ynet that announcement had taken the family by surprise: "You don't know that you've won until the very last moment," he said. "It's a great joy, the family feels wonderful. We are delighted about it."

Prof. Tzipora Shechtman, the new Nobel laureate's wife, told Ynet: "Everyone said Dan would win, but he insisted that he wouldn't. Because he was so modest, I stopped believing it too. He definitely deserves it," she stressed. "We went through years of studies, investment, hard work and many wars on the way, but he was stubborn. Just don't ask me what he discovered because I wouldn't be able to tell you."

In 2009, Israeli scientist Ada Yonath was awarded the Nobel Chemistry Prize for showing how ribosomes function, work that has important implications for antibiotics.