Israeli recipient of 2011 chemistry Nobel Prize says groundbreaking discovery of 'quasicrystals' would have been delayed for years without powerful electron microscope. Shechtman's high school teacher: He was a good student, but not excellent

VIDEO - Recipient of the 2011 Nobel Prize in Chemistry, Professor Daniel Shechtman, returned Wednesday to where it all began – his laboratory in the Technion – and revealed the secret without which he wouldn't have made his groundbreaking discovery – an electron microscope.

"The Titan Microscope, which is considered the most advanced of its field, is a high resolution electron microscope that can easily detect atoms and is used for discoveries," the tenth Israeli Nobel laureate said.

Shechtman, along with his colleagues Technion President Prof. Peretz Lavie and Dean of the Department of Materials Engineering Prof. Wayne D. Kaplan, wore a blue-green tie with a "quasicrystal" pattern, especially designed by the Technion for the Nobel winner's 70th birthday. 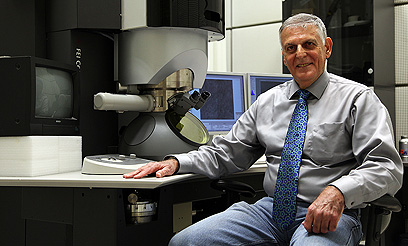 "This is a tie made for me in honor of my birthday; it was designed and given to me by the Technion for my 70th birthday earlier this year. The Technion also held a celebration in my honor, a huge event, it was amazing; the who's who of the quasicrystal community attended the celebrations at the Technion president's invitation. It wasn't just one impressive event but a string of impressive events," he said proudly.

Recipient of the 2011 Nobel Prize in Chemistry, Professor Daniel Shechtman

'Good student, but not excellent'

Among those who congratulated Prof. Shechtman for his remarkable achievement was his high school teacher, Menashe Tzadka, who is in his mid 90s.

Tzadka, who taught Shechtman physics for four years, said he keeps records of all his students, and "after looking at them today, I saw that he was a good student – but not an excellent one." In fact, because Shectman was not among his top students, Tzadka was extremely overjoyed by the award. "I suppose grades are not the only determining factor. With time, the student develops – it depends on the conditions and the environment around him.

"Of course I am proud, but I don't give myself credit for his winning – I may have had a tiny part in it," he said. 'I may have had a tiny part in the win.' Menashe Tzadka (Photo: Moti Kimhi)

The Royal Swedish Academy of Sciences honored Shechtman for the discovery of "quasicrystals" – patterns in atoms which were thought impossible, adding that Shechtman's discovery in 1982 had fundamentally changed the way chemists look at solid matter.

Contrary to the previous belief that atoms were packed inside crystals in symmetrical patterns, Shechtman showed that the atoms in a crystal could be packed in a pattern that could not be repeated," the RSAS said.

"His discovery was extremely controversial. In the course of defending his findings, he was asked to leave his research group. However, his battle eventually forced scientists to reconsider their conception of the very nature of matter," it said.