Opposition chair had canceled December 2009 trip after British judge issued arrest warrant over her involvement in Cast Lead; tells Ynet: 'I am coming for the sake of the State of Israel's representation'. Britian's top prosecutor blocks attempt to seek warrant for her arrest

Two years after an arrest warrant was issued against her for allegedly committing war crimes during Operation Cast Lead, Opposition Chairwoman Tzipi Livni began her first visit to the United Kingdom on Thursday.

Livni's visit, which required strict security arrangements from both Israel and the UK, has generated interest in Britain: It comes in the wake of an amendment to a highly controversial law that enabled British courts to prosecute foreigners accused of crimes against humanity, wherever they were committed.

Benayahu: I entered UK with pseudonym 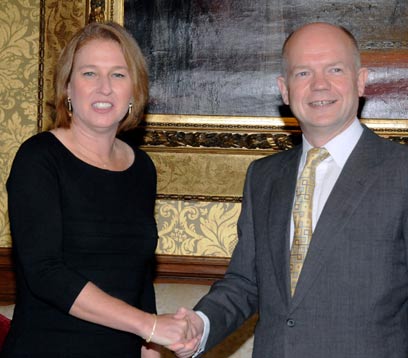 An unidentified person applied to the Director of Public Prosecutions, Keir Starmer, on Tuesday for permission to apply to a court for an arrest warrant against Livni for alleged war crimes linked to Israel's offensive against Gaza in 2008, the Crown Prosecution Service said in a statement.

It said prosecutors had not reached a decision, but the government certified that Livni was on a "special mission", which courts have ruled provides immunity from prosecution, and the application had therefore been turned down.

Livni learned of the attempt while meeting with heads of Jewish university groups. "There are those who continue to try to cynically exploit the British legal system, and Britain aptly prevents this," she said. "My own personal issue is not important, but the ability of senior Israeli officers and officials to go wherever they want. Britain must stop political elements from abusing their legal system."

Previously, anyone in Britain could apply to a judge for such a warrant, but since the change in September such a motion requires the approval of the government's chief prosecutor. 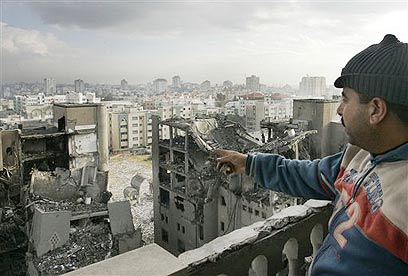 Livni canceled a 2009 December trip after a British judge issued an arrest warrant over her involvement in the 2008 operation in Gaza Strip, when she served as foreign minister in Ehud Olmert's government. The law, legislated after World War II, had not been put into use in Britain for years. It was only recently amended in the British Parliament by a mere one-vote majority – 223 to 222.

"I am coming for the sake of the State of Israel's representation," Livni told Ynet upon her arrival in the UK. She met Foreign Secretary William Hague and other officials in London.

"Although the change in the law passed by a very slim majority, it should be remembered that it doesn’t only deal with Israel," she said. "Ever since this distortion was created, we have made efforts to mobilize cross-party support in favor of the issue. It was very important that it would not be perceived as political in nature," the Opposition chair said.

Two pro-Palestinian demonstrations await Livni on the first day of her visit. The provocations, she says, do not bother her. "I already said in the past that I plan on coming whether the law was amended or not. The situation that evolved was unbearable and affected relations between the two countries.

"It made it difficult to coordinate sensitive and security-related matters. Eventually, we are all part of the battle against terrorism and this legislation was actually used by radicals against Israel," she said.

During her meetings, her role in Operation Cast Lead is likely to surface. "The fact that there is a focus on my visit will obviously raise this question. I can say that I am proud and fully stand behind the decisions I made during Cast Lead. They were the right decisions facing an organization that does not recognize Israel's existence, an organization with which there is no hope to achieve peace with."

In a statement issued after talks with Livni, Hague said it was "an appalling situation when political abuse of our legal procedures prevented people like Mrs Livni from travelling legitimately to the UK."

The Foreign Office said Livni thanked Hague for the change in the law that had clouded Israeli-British relations.