'Investment in science paying off'

"Shechtman's Nobel is a victory not only over science, but over scientists as well," Israeli Nobel laureates said Thursday, following the Royal Swedish Academy of Sciences' decision to award Professor Daniel Shechtman the 2011 Nobel Prize in Chemistry.

Shechtman's road to the coveted honor was a winding one, and his win – for the discovery of atom patterns thought impossible – was ridiculed before its significance was recognized by the scientific community.

Prof. Avram Hershko, who won the Nobel Chemistry in 2004 congratulated Shechtman: "This is a great achievement for science and for Israel, but you have to remember that all of the recent Israeli Nobel laureates are over 70, and their achievements can be attributed to the investment and support that science in Israel received 30 years ago."

Shechtman's discovery, he added, "Was always deemed as revolutionary and Nobel worthy. Unfortunately, over the past decade, the (State's) financial support of the sciences has taken a blow… If we want to keep being leaders in the field we have to further invest in laboratories and scientists," he said.

Shechtman has already declared that accolades aside – his place is in his lab. Hershko agrees: "It's not easy being a celebrity, it could impede future research. The Nobel ceremony itself is nothing to be anxious about," the professor continued, amused, "the problem is surviving all the events that follow."

Yisrael Aumann, who was awarded the 2005 Nobel Prize in Economics, also congratulated Shechtman: "As Israelis, we like to practice self-flagellation and say that our universities are on the verge of collapse etc, but I say that is not the case. 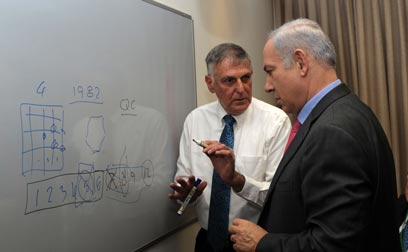 "I'm proud of Israeli science. Wherever Israelis are they are at the forefront of science. This is a tremendous achievement for Prof. Shechtman, but also for the Technion and Israel; and it's a day of jubilation for Israel's higher education system and scientific institutions," he concluded.

Hammarskjöld said that she was honored to meet a scientist whose work was so "inspiring"; and expressed her hope that Israel and Sweden would bolster their scientific ties.

Professor Shechtman met with Prime Minister Benjamin Netanyahu in his office in Jerusalem on Thursday and presented his discovery on a dry-erase board. The meeting was also attended by Technion President Professor Peretz Lavie, Education Minister Gideon Sa'ar and Science and Technology Minister Daniel Hershkowitz.

Netanyahu told Shechtman he hoped many more Israelis will follow in his foot steps and win Nobel prizes thanks to the government's investment in education. He noted that the government has approved a NIS 7.5 billion (roughly $ 2 billion) increase for the Higher Education budget.

Ronen Medzini and Ahiya Raved contributed to this report