'Mosque arsonist's hands should be cut off'

No calm in Galilee town of Tuba Zangaria following news of arrest of suspect in mosque arson incident. Residents say punishment is not enough

The residents of Tuba Zangaria are not satisfied with the arrest of an 18-year-old Jewish youth in connection with Monday's Tuba Zangaria mosque arson attack.

They want to see those responsible for the mosque torching sentenced to prison for a very long time, some also believe violence is the only answer: "His hands should be cut off".


The upper Galilee village's place of worship was set on fire as a "price tag" act. The suspect was originally remanded for four days. On Thursday, the Kfar Saba Magistrate's Court granted the police's motion and remanded him for an additional five days. 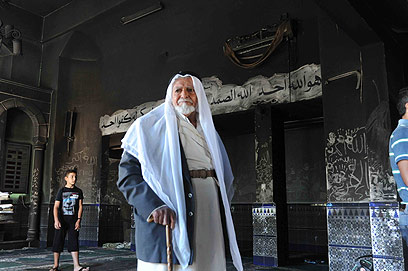 Tuba Zangaria residents not appeased (Photo: Aviyahu Shapira)
"The people who burnt the mosque down should be found and given a harsh sentence. We must not be slighted because we are Arabs," Ali al-Haib told Ynet. "If the incident passes without comment it is proof that the government does not value our holy places."

The case is still under a gag order, but according to details made available on Thursday, the youth was arrested several hours after allegedly committing the crime.

This led another angry resident, Halil Zangaria to add that from his point of view so long as there is a gag order and no unequivocal proof that the suspect is the one responsible for the arson attack, there is no real progress in the case. "I suspect that the police only arrested him to restore peace and quiet so that there won't be any more riots," Zangaria said. "If it is revealed that a Jew really burned the mosque then we will not remain silent, this is a very serious act. We will fight to protect our mosques from racists and Arab haters."

Another resident did not feel that sending the perpetrator to jail for the vandalism was enough. "The hands of whoever is responsible for burning the mosque should be cut off. We will not make do with a punishment. We will demand that he apologize to us." Meanwhile, the suspect's parents are finding it difficult to digest the news. According to the parents, their son does not usually share his doings with them and "acts like he works for the Mossad or Shin Bet".

The suspect was taken into custody by a routine police patrol that spotted his vehicle and suspected that he was using it illegally.

Two other individuals who were in the car at the time were arrested as well, but were released shortly thereafter.

The suspect's attorney, Adi Keidar, told Ynet that his client denies the allegations against him, adding that the case was based on police intelligence leads and not actual evidence.