Cleared for publication: Two Palestinians from Halhul were arrested on Tuesday on suspicion they murdered Asher Palmer and his infant son Yonatan near Kiryat Arba last month. The two were arrested following an investigation involving the police, the Shin Bet and the IDF.

A gag order has been placed in the identities of the detainees and the details of the investigation.

During their interrogation, the suspects admitted to throwing the stone which caused the deaths of Asher and Yonatan. The stone was hurled from a driving car. Police are also looking into the possibility that the two are behind 17 other cases involving stones being hurled at Israeli vehicles. 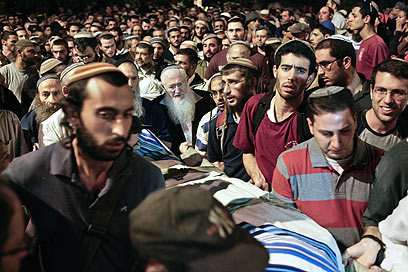 Three other Palestinians were also arrested and confessed to taking Palmer's gun after the attack. Police have found and are in possession of the weapon.

The Palmer family received the news of the arrest with mixed feelings. Asher Palmer's brother Moshe Palmer said: "It helps a little to give a sense of closure, but my dealing with it has less to do with the question of whether the murderers were caught or not.

"I'm still trying to digest everything that happened. The penny hasn't really dropped for us, it's difficult to comprehend."

"I have never felt the need for revenge but I'm glad they were arrested," he added. "Why they did what they did – is no great secret. It doesn't make the pain any easier, but it's good that a relatively short time after the incident, they managed to apprehend the people. I believe that those responsible for catching these people have done their job properly."

Meanwhile, Knesset Member Michael Ben Ari (National Union) chose to attack the police and IDF and claimed that there are certain factors within the institutions that consider Jewish blood cheap. "All they want is to end their shifts and go home," he said.

"I call on the Internal Security Minister to demand the immediate dismissal of the Shai District spokeswoman and the Judea and Samaria Division spokesman for choosing to hide the truth from the nation and the world," Ben Ari added.

Eretz Yisrael Shelanu Chairman Baruch Marzel has called for the death penalty to be carried out against the murderers of Asher and Yonatan Palmer and said: "Only in Israel do the murderers of babies go home after a few years in prison."

Asher Palmer, 25, and his 1-year-old son Yonatan were killed last month after their car overturned as a result of stones hurled at them. Police initially denied that stones had caused the accident but later concluded the incident was in fact a terror attack.