Republican presidential candidate Mitt Romney says that if elected he would 'bolster and repair alliance' with Israel; enhance US deterrent against Iranian regime. 'Our friends should never fear that we will not stand by them in an hour of need' he says

WASHINGTON – Republican presidential hopeful Mitt Romney on Friday said that if elected he would increase defense assistance to Israel and enhance US deterrence against Iran.

In his first major foreign policy speech in South Carolina, the former Massachusetts governor said: "I will begin discussions with Israel to increase the level of our military assistance and coordination. And I will again reiterate that Iran obtaining a nuclear weapon is unacceptable.”

Romney warned that “In the hands of the ayatollahs, a nuclear Iran is nothing less than an existential threat to Israel. Iran’s suicidal fanatics could blackmail the world."

He suggested that as a fully activated nuclear weapons state, Iran could "threaten its neighbors, dominate the world’s oil supply with a stranglehold on the Strait of Hormuz. 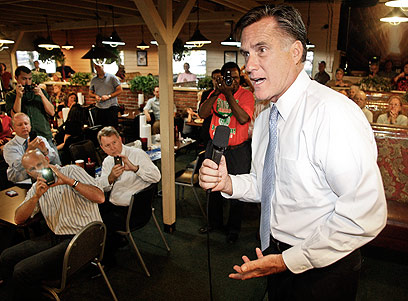 Romney claimed that the current administration's "ambivalent" attitude bolsters those who seek Israel's destruction and suggested that Israel might further be isolated if Obama remains in office.

“By 2015, will Israel be even more isolated by a hostile international community? Will those who seek Israel’s destruction feel emboldened by American ambivalence? Will Israel have been forced to fight yet another war to protect its citizens and its right to exist?”

He pledged to “bolster and repair our alliances. Our friends should never fear that we will not stand by them in an hour of need. I will reaffirm as a vital national interest Israel’s existence as a Jewish state.”