Prime Minister Benjamin Netanyahu condemned the vandalizing of two Arab cemeteries over the weekend and the hurling of a Molotov cocktail at a Jaffa synagogue Saturday evening. "Lately we have witnessed an attack on Muslim, Christian and Jewish sites," said Netanyahu. "We will not tolerate any kind of vandalism, especially not when it's directed at religious sentiments." Related stories: Jaffa: Arab cemeteries vandalized

The prime minster added that "Israel is a tolerant state, but not tolerant as well. It's tolerant of values of coexistence, mutual respect, non-violence, a life of pleasantness and peacefulness. It doesn't tolerate those who oppose this way of living. We will work to find those responsible for these actions and try them to the fullest extent of the law."

Over the weekend, some 25 tombstones were vandalized at two Jaffa cemeteries belonging to Muslims and Christians. The messages “Death to Arabs” and “Price tag” were spray-painted on the graves.

Police forces arrived at the site and launched an investigation into the incident, but no suspects had been arrested at this time. 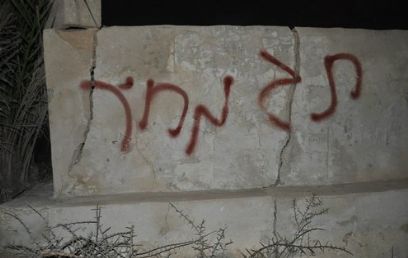 Police officials have held talks with community leaders in order to prevent an additional escalation in the area. "Our greatest fear is that there will be casualties and then everything will go up in smoke," the police officials said.

The police are not ruling out the possibility that the grave desecration was an act carried out by soccer fans as evidence in the area indicated.

Security footage will most likely assist police in determining the exact time that the acts took place.

Meanwhile, a different police investigation team is looking into the case of the Molotov cocktail thrown at a Jaffa synagogue. In addition to the investigations, the police are putting a great deal of effort into calming the area by promoting deliberations between the various Jaffa factions.

The police are aware of the possibility that the next targets of extremists could be the many Sukkot set to be constructed in the city streets over the next few days, these acts could bring about another wave of violence.