President of the Islamic Republic of Iran

Mahmoud Ahmadinejad is the president of the Islamic Republic of Iran. He began his term on August 6, 2005 after winning that year's elections.

Ahmadinejad was born on October 28, 1956, in the village of Ardan, not far from the Iranian capital Tehran. He was the son of a blacksmith, and at the age of seven his family moved to Tehran. In 1975, he began his undergraduate studies in civil engineering at the Iran University of Science and Technology.

In 1997, Ahmadinejad received his Ph.D. in transportation engineering and planning from the same university and stayed on as a lecturer.

As a student, Ahmadinejad was also politically active and was involved in the Islamic movement's activity against the Shah's leadership.

After the 1979 Islamic revolution, Ahmadinejad founded the Islamic student union at the Iran University of Science and Technology and became a member of the Revolutionary Guards. He fought in the Iran-Iraq war, and according to some sources, was involved in a number of secret military operations in Iraq.

During his time as mayor, Ahmadinejad became known for his conservative policies. He reversed many of the changes put into effect by previous, more moderate mayors, and closed all fast-food restaurants and order ed the municipality's male employees to grow beards and wear long-sleeved shirts.

Parallel to his political career, Ahmadinejad continued his academic work, and in 1989 became a member of university's science & engineering board.

His election victory is largely attributed to the support he received from conservative circles in the Iranian political establishment, backed by Iran's Supreme Leader, Ali Khamenei, who viewed Ahmadinejad as a representative of their political views. Ahmadinejad's image of a simple, honest man, who could represent the weaker classes also contributed to his success and popularity.

During his presidential campaign, Ahmadinejad focused on socio-economic issues, such as fighting corruption, eradicating unemployment, developing rural areas, combating poverty and demanding a more just distribution of wealth in the Iranian society, keeping true to the values of the 1979 Islamic revolution.

Ahmadinejad also took a hard line on confrontation with the West regarding Iran's nuclear program, which Israel and other western countries suspect includes the development of nuclear weapons. 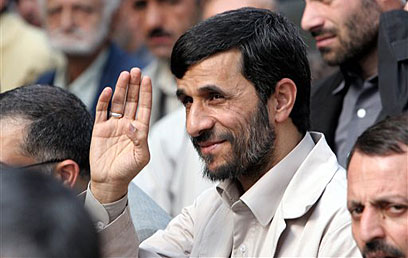 After his election in 2005, Ahmadinejad was identified by American civilians as one of the key individuals involved in the US embassy take-over in Iran during the 1979 revolution. His involvement was denied by Iranian authorities, and the matter remained unresolved.

Since taking office, Ahmadinejad's speeches and actions have come under increasing international criticism, particulary his ambition to take Iran nuclear. His statements that the "Zionist regime" should be "wiped off the map," and his repeated Holocaust denial, which peaked with Tehran's hosting of the International Conference to Review the Global Vision of the Holocaust , have made his nuclear plans a matter of pressing concern to Israeli policy makers.

Ahmadinejad is married with three children.


פרסום ראשון: 10.09.11, 14:00
commentsend to friendshareshare
See all talkbacks Close all talkbacks
new comment
Next
Previous
Warning:
This will delete your current comment
cancelOk