The PA will seek World Heritage status for the birthplace of Jesus, Bethlehem, once the UN’s cultural agency (UNESCO) admits them as a full member. Hamdan Taha, the Palestinian Authority minister who deals with antiquities and culture, also listed Nablus and Hebron among 20 cultural heritage sites which he said could be nominated as World Heritage Sites.


Professor Taha is a pioneer of the new Palestinian revisionism. Last January National Geographic magazine ran a “Travel Palestine” ad that appeared to blot out the State of Israel’s existence. Published by Taha’s Ministry of Antiquities, the ad said that “Palestine lies between the Mediterranean coast and Jordan River.” This is just one example of Taha’s propaganda successes around the world. 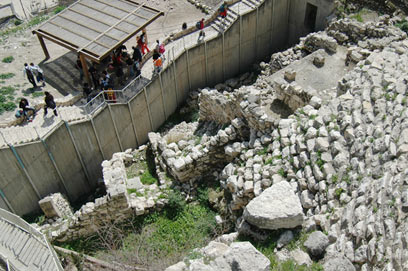 Taha's bid at UNESCO is supported by the Vatican Custody of the Holy Land, the Greek Orthodox Church, and the Armenian Church. As th UN bid brings the Palestinians closer to an independent state, the historical and archeological claims are playing an increasingly prominent role in the building of the national consciousness. Taha, who did his undergraduate work in Berlin, worked in Jericho with Paolo Matthiae, an Italian scholar who discovered Ebla, the Syrian site that is most famous for the “Ebla tablets.” In Herodion (Herod’s fortress in the Judean hills), Taha worked with Michele Piccirillo, a Fransciscan priest who has been one of the most famous Italian archaeologists. Taha gets funds and support from UNESCO, European governments and societies like the Studium Biblicum Franciscanum, a major Catholic association in Jerusalem. The former Vatican’s archbishop in Jerusalem, Michel Sabbah, who just promoted an appeal to the UE and US to “stop the Hebraization of Jerusalem,” and the current Latin Patriarch of Jerusalem, Fouad Twal, who is denouncing the “Judaization of the city,” are just two major Christian figures who embraced Taha’s rhetoric.

Taha manages 10 research excavations conducted with foreign funding. The Dutch government, through UNESCO, just donated 300,000 euros to the Palestinian Authority, meant to finance the excavation of an ancient city outside Nablus. A feature entitled “Jerusalem, a City Crying Out for Justice” in the PA’s Internet site said that “all historic studies and archeological excavations have failed to find any proof” for the existence of the ancient Jewish temples.

Taha is now trying to put together a case to take Israel to the International Court of Justice in the Hague to condemn the Israeli excavations near the Temple Mount as “war crimes and crimes against humanity.” This is the most inflammatory calumny that was directly connected to the deaths of dozens of Israelis and Palestinians during the so-called “Western Wall Tunnel riots” of 1995.

From his office in a restored house in Ramallah, Taha is also mastering a new Palestinian denial meant to cancel any trace of Jewish presence in the Holy Land. According to Taha, the Bible is a “mythological narrative,” Israeli archeology is “Eurocentric,” “land was confiscated in the name of God and archaeology” and the Israeli works are rooted in “imperialism.” Taha just finished a project, in cooperation with the Dutch University of Leiden, on the outskirt of Nablus, Tel Balata, home to the Joseph’s Tome, one of Judaism’s holiest sites. The renewed excavations at Tel Balata and the establishment of the archaeological park are being conducted jointly by Taha’s ministry, the government of the Netherlands and UNESCO. Taha hopes that the dig will help in “writing or rewriting the history of Palestine.”

Despite Tal Balata being identified with ancient Shechem in Samaria, where the Israelites buried Joseph’s bones when they returned from Egypt, Palestinians now claim that the tomb in reality is the final resting place of Sheikh Yusuf Dukat, a locally venerated Muslim who lived about 150 years ago.

When last year Prime Minister Benjamin Netanyahu declared that two religious sites, Rachel’s Tomb in Bethlehem and Cave of Patriarchs in Hebron, would be among 150 Israeli heritage sites considered for renovation, Taha declared that the Jewish character of the two holy shrines was “artificial” and “a robbery.” He said that even the Dead Sea Scrolls were “stolen” from Palestinians. The town of Shiloh is another target for Taha’s revisionism. Despite Shiloh being the capital of the Jewish nation for nearly four centuries and the Jews having brought the Tabernacle there, making Shiloh the religious center of the Israelites before Jerusalem, Taha is convincing the international community that the Jewish Shiloh never existed: “In Shiloh the settlers pretended to have found the tabernacles,” he proclaimed. “They can find the chicken bone my grandfather ate 50 years ago and say it was a young calf for ancient sacrifice.”

On October 21, 2010, UNESCO formally declared that Rachel’s Tomb is the Bilal ibn Rabah mosque - endorsing one of Taha’s lies. Israel, under a direct assault on the foundations of the Jewish people, is drawing back and the world now literally believes that the Jews stole the past, the Jewish monuments are Arab treasures stolen by the Zionists, and that the Jews are no more than invading colonizers.

Archaeologist Barkai once said that this revisionism is even worse than Holocaust denial. Yet for now, Palestinians are winning the war to rewrite history.