Shalit's family: It's now or never

While Cabinet decides over fate of kidnapped soldier, Gilad's uncle says 'sides finally understand there is narrow window of opportunity,' but warns 'we've been in similar situation in December 2009'

Could 1,934 days in captivity finally be over?  While Cabinet members vote on the fate of their son, kidnapped soldier Gilad Shalit's parents said Tuesday that they hope this time they really will get to see their son come home.

Noam Shalit, Gilad's father, said: "We are waiting here like everyone else. We are receiving updates, but we don’t really know anything new other than what has been published. We are going to wait for developments." 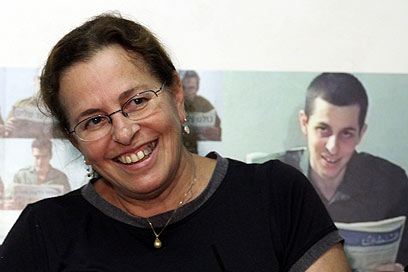 Aviva Shalit can finally smile in the protest tent on Tuesday (Photo: EPA)

"We were in a similar situation in December 2009," Shalit's uncle told Channel 10. "I personally feel that that this time the sides really understand that it is now or never. We have a very narrow window of opportunity. To my understanding, the government of Israel asked to conclude the deal in wake of the growing protests around the country."

Saudi Arabia's Al-Arabiya TV reported Tuesday that Egypt has made a breakthrough in its mediation of a deal meant to secure the release of Shalit, and that such an exchange may take place as early as November.

An Israeli official confirmed that Prime Minister Benjamin Netanyahu has convened his cabinet to discuss the prisoner exchange deal that would bring the Hamas-held soldier back home. 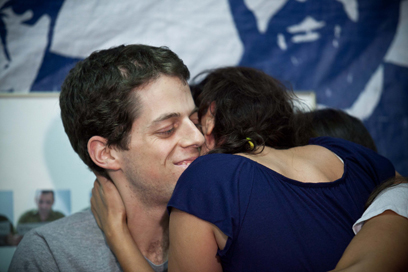 Ehud Kanar, one of the leading activists in the campaign to release Shalit, arrived in Jerusalem immediately after rumors of a nearing deal began to spread.

"I came to be with (the family) them and to support them. I don't know of any new information. From past experience I would say the most important thing is to keep our feet on the ground. We've already been through this scenario, so it's hard to know what's going to happen," he said.