The Shalit deal, as far as Hamas is concerned, frees it from political entanglement and presents the Palestinian people with a real political achievement

Hamas agreed to the prisoner swap deal that will bring Gilad Shalit home while making many concessions. The changing geopolitical circumstances, the Arab Spring that did not bring much good to the movement and Mahmoud Abbas’ triumphant performance at the United Nations General Assembly pushed Hamas aside with its back against the wall in several central arenas.

The international legitimacy that Abbas is receiving across the globe created the sense among Hamas leaders that not only is it not in the limelight, but also that it is unsuccessful in presenting a real political achievement to the Palestinian people.

The heads of the movement were seeking a way out. The Shalit deal, as far as Hamas was concerned, is the point where it would free itself from the political entanglement it fell into. 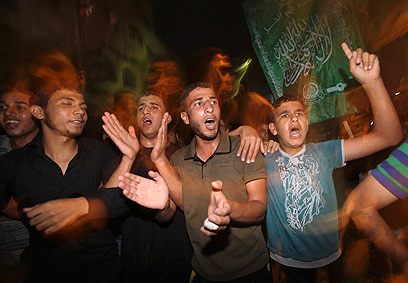 Hamas’ political weakness wasn’t only obvious on the backdrop of Abbas’ achievements. The Arab Spring did not bode well with the Islamic party either. The uprising in Syria severely limited the maneuvering options of the Damascus-based Hamas politburo. Naturally, Hamas had to support the Syrian masses and the Muslim Brotherhood movement in Egypt, as many of those who took to the streets identified with its values.

However, the fact that Syria supports Hamas and acts as its patron prevented Khaled Mashaal and other group leaders from clearly declaring their opposition to Bashar Assad’s regime. In response to the turmoil in Syria, Hamas sought to get closer to Egypt. The inking of the internal Hamas-Fatah reconciliation agreement was the first sign that Hamas was willing to make compromises on its way back to the center of the public arena.

The same agreement was refused by Hamas in October 2009 but the geopolitical changes demanded that Hamas make a sacrifice. As soon as it signed the reconciliation deal with Fatah, a path for dialogue  with Egyptian intelligence was created. The fact that Hamas demonstrated flexibility in this matter prompted heads of Egyptian intelligence to exert heavy pressure on the movement in an attempt to push forward other issues as well.

The heightened tensions along the Egyptian border with Israel after the terror attacks near Eilat in August actually enhanced the dialogue between Israel and Egypt on a series of security-related matters. This dialogue was also a factor in promoting the prisoner swap deal, as Egypt wanted to prove that it was still a central player in the post-Mubarak era, and able to fulfill the role of the responsible mediator. 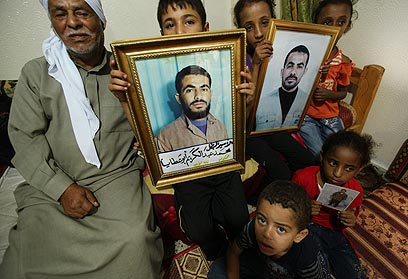 However, one must remember that there are also power struggles within Hamas. Once the group forcefully took over the Gaza Strip, becoming the sovereign power there, it began to bear direct responsibility for the lives of Gazans. Hamas in Gaza took heavy blows since the takeover and Shalit’s kidnapping, culminating in Operation Cast Lead.

Beyond the heavy price that the movement paid, it was also required to rehabilitate the Strip, a poverty-stricken territory that is one of the most crowded places on earth. Gazans raised their eyes to the West Bank, where Abbas succeeded in establishing state infrastructure, and concluded that Hamas has failed them. Hamas’ inability to present a diplomatic achievement led the Hamas' Gaza leadership to apply extra pressure on Hamas’ leadership in Damascus to push the deal forward.

As far as Hamas is concerned, the Shalit deal will enable it to bring to the Palestinian street a spontaneous wave of joy. In Palestinian eyes, the prisoners issue is one of the most important matters on the agenda and it enjoys a consensus. The deal will allow Hamas to show that it too has achieved national success that will challenge Abbas.

The prisoner exchange agreement will be presented on the Palestinian street as a real victory that was a result of Hamas’ armed resistance, in contrast to the diplomatic path undertaken by Abbas.

Hamas will further argue that although the diplomatic path manages to win international support, it fails to prove itself on the ground, in everyday life. Hamas did not only act on behalf of its own prisoners as it ensured that among those released would be members of all Palestinian factions.

Israelis will soon be exposed to things they will find hard to grasp. Among the 1,027 Palestinian prisoners who will be released are hundreds of terrorists with blood on their hands, who will be received on the Palestinian street as heroes. Abbas, who welcomed the deal, is well aware of the wave of Hamas popularity that is expected to consume the street once the prisoners come home.

Hamas has managed to create a real political achievement. The big question is whether this wave of support would translate eventually into terrorism. If that does happen, Israel can back down from its commitments and thwart actions undertaken by those who would return to terrorist activities.

The Palestinians know that today, more than ever, they have too much to lose. The prisoner exchange deal presents a significant challenge not only to Israel, but also to Abbas, Fatah and the state-building project it has taken upon itself.

Dr. Ido Zelkovitz is an expert in Palestinian society and politics and teaches in the Middle East Studies Department at Haifa University.