Palestinian officials voice criticism of fact that top operatives, including Marwan and Abdullah Barghouti, Ahmed Saadat and Ibrahim Hamed were not included in the prisoner swap deal; Efforts continue to finalize deal in Cairo

Palestinian officials from both the Gaza Strip and the West Bank voiced criticism of the prisoner exchange deal that was reached between Israel and Hamas, undermining efforts made by the terror group to present the agreement as a sweeping success.

Palestinian sources told the newspaper Asharq al-Awsat that Hamas officials were shocked that senior operatives in the organization's military wing, including Hassan Salama, Abdullah Barghouti, Abbas a-Sayed and Ibrahim Hamed will not be among the released. The sources said that several senior operatives have cancelled their speeches on the matter, and a joint press conference that was supposed to be held by the Izz ad-Din al-Qassam Brigades and the Popular Resistance Committee on Wednesday was called off. 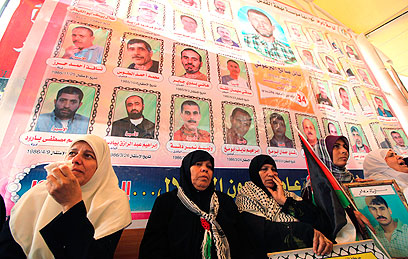 Palestinian mothers calling for release of their sons, held in Israel (Photo: Reuters)
"The negotiations on the deal had to focus more on the political, symbolic and national significance held by the senior leaders, including Marwan Barghouti and Ahmed Saadat," he said. The son of Saadat, who headed the Popular Front for the Liberation of Palestine and was responsible for the assassination of Israeli minister Rehavam Ze'evi, said that his father's continued confinement came as a shock, "even though we didn't expect Israel to (free him)."

Shalit to arrive in Egypt on Tuesday

The newspaper quoted an Egyptian source as saying that Shalit is expected to arrive in Egypt on Tuesday. Israel is expected to begin releasing the Palestinian inmates that same day. 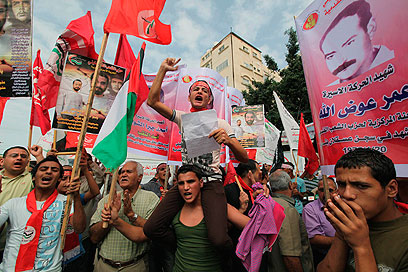 Gaza after deal was signed (Photo: Reuters)
The source noted that Egypt put in much effort over the past few months to mediate the indirect talks over the deal in Cairo.

"We submitted more than 20 offers to the two sides," he said, adding that Hamas initially insisted on including the senior operatives in the prisoner swap, but Israel refused "because they have blood on their hands."

The source noted that Israel eventually agreed to release 40 top security prisoners, out of a list of 70, a measure it previously refused to take.

"This means Hamas was granted 60% of its demands," he said.

According to the source, Israel and Egypt will pick which 550 inmates to free in the second phase of the deal, scheduled to take place in two months. The list is yet to be finalized.

Also per the report, a Palestinian source said that the decision to release all of the female Palestinian prisoners, without an exception, was agreed upon a while ago. He said that Shin Bet Chief Yoram Cohen was the one to rule in the female inmates' favor.