Israeli defense experts laud prisoner exchange deal which will bring captive soldier home, say that while it's likely to have some ramification, it won't necessarily lead to more abductions

Former defense establishment chiefs welcomed the prisoner exchange deal meant to secure the release of IDF soldier Gilad Shalit after five years in Hamas captivity, but warned that the release of 1,027 Palestinian security prisoners will not be without consequences.

Former Shin Bet Chief Yaakov Peri rejected the arguments brought up against the prisoner swap, saying that the deal does not cross any "red lines."

"The significance of the deal is singular – retrieving a captive soldier and bringing him home to his family," Peri told Ynet. "The deal is not without risks, but it is obligatory."

Peri voiced his support for a prisoner exchange deal several timed over the past five, and believes that despite the mass release of convicted terrorists, the deal will not necessarily lead to a third intifada. "If anything will end up leading to a third intifada it would be the stalemate in negotiations. The fact that the deal has two stages is wise both from a tactical standpoint and from that of the ability to monitor the 450 prisoners included in the first stage. "The first 110 prisoners returning to the West Bank pose the main problem, but beyond that the deal doesn’t necessarily encourage future abductions," he continued.

"Terror groups always were – and always will be – motivated to carry out abductions. I'm glad to see that the Israeli government did not let that deter it from going ahead with the deal."

Peri explained that the deal would also help solidify relations with the new Egyptian regime, as the second stage of the deal, which will see 500 prisoners released, is defined as a gesture to Cairo. 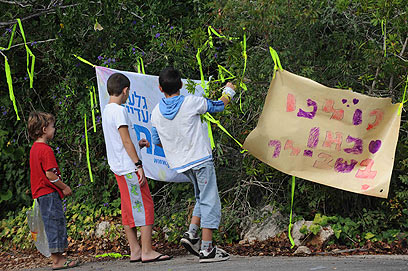 Rami Igra, who once served as head of the Mossad's Prisoners and MIAs Department, also lauded the deal, but said that Israel must not be complacent: "This is a time for us to embrace the Shalit family, but unfortunately, this is also a time in which we will start paying the deal's real price," he warned.

"The deal proves to Israel's enemies that a lone captive solider is just as strategic a weapon as an F-15 squadron…. Only time will tell whether the defense establishment's statements – that Israel can deal with the risk posed by the release – is true.

"We have to pray that these assessments are right and that Israelis won't end up paying for the deal with blood."

Igra further explained that the deal was facilitated by Palestinian President Mahmoud Abbas' newfound political standing, which was bolstered by his statehood bid in the UN.

The achievement, Igra said, compelled Hamas to present an achievement of their own, however, "Signing the deal at this time, bolsters Hamas' standing an the expense of the Palestinian Authority."

Dr. Nachman Tal, the former head of the Shin Bet's Arab Desk, was responsible for the apprehension of dozens of terrorists included in the deal, but he too rejects the notion that Israel is paying too high a price: "The most important thing is mutual guarantee… Who's to say what's 'too high a price'? We've always paid a high price in such deals. Unless there is a change in (government) policy, this is the reality.

"Every deal carries risks," he continued. "Naturally, looking at this list, I feel a little pinch, but even in this new reality, Israel still has options to follow."

Tal, who still serves an a consultant to the Shin Bet, believes Israel could not have brokered a better "price" for Shalit: "Hamas wouldn’t have relented. They play by a different set of rules."

Meanwhile, the Defense and Justice ministries are forging ahead with the legal preparations for the prisoner exchange deal.

The Justice Ministry has to perform a complete background check on each prisoner slated to be released, and with the Defense Ministry, verify the identities of all prisoners included in the deal.

The full list is expected to be published on Sunday. The public will have 48 hours to file objection to the deal's outline and the Justice Ministry will operate a special hotline to that effect.

All of the objections will be reviewed by Justice and Defense ministries' personnel for merit. The Justice Ministry is also preparing for the foreseen High Court petitions against the deal.

Should such petitions be filed, Attorney General Yehuda Weinstein is expected to head the State's rebuttal team.

Several terror victims' families have already voiced their objection to the impending prisoner swap. Senior Israeli legalists told Ynet that while the High Court is likely to hear each petition carefully, it is highly unlikely it will try to intervene in the government's decision to go ahead with the deal.