Gantz: Gilad to return on Tuesday

IDF Chief of Staff Lt.-Gen Benny Gantz officially informed Noam and Aviva Shait that their son, captive soldier Gilad Shalit, is set to return home next Tuesday after five years in Hamas captivity. Gantz visited the Shalit family home in Mitzpe Hila on Thursday, ahead of the impending prisoner swap.

The IDF Chief briefed the family about the details of the deal, explaining that the first phase of the swap will take place on Tuesday: According to the agreement, Gilad will be flown to Egypt and from there to the Tel Nof Air Force base – where his family will finally reunite with him.

The IDF chief declined to speak to the media upon leaving the Shalits' home. 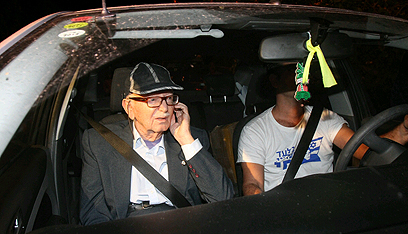 Shimshon Libman, who heads the Shalit campaign, told reporters that "the chief of staff met with the family… He probably discussed the preparations being made ahead of Gilad's return. "I hope that we'll have Gilad back home by Simchat Torah night, barring any problems."

Popular Resistance Committees' Spokesman Abu Mujahid said Thursday that Shalit's captures will release a video documenting his time in captivity, after the prisoner exchange is completed.

"The video will show that he was treated well and with respect, as demanded by the Islamic dogma," he said.