Some 30,000 Arab Israelis took part Friday in a rally titled "Al-Aqsa Mosque in Danger," vowing to "redeem" the holy Muslim site in Jerusalem "with blood."

The event was organized by the northern branch of the Islamic Movement in the northern Israel town of Umm al-Fahem. Participants chanted "Allahu Akbar" and "we shall redeem you with blood and spirit, oh al-Aqsa.'" 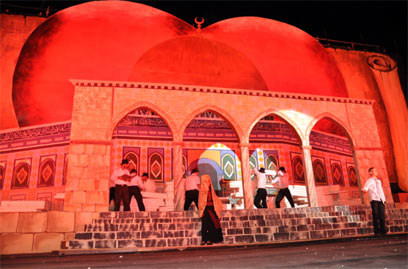 The head of the Supreme Arab Monitoring Committee, Muhammad Zidan, said that "harming the holy sites is a red line for us and would lead to difficult steps."

"Most of the Arab public would hit the streets to defend them," he said.

Protestors held up Palestinian and Turkish flags during the event.

'Message to State of Israel '

Referring to the Shalit prisoner swap, the Islamic Movement's deputy chief, Sheikh Kamel Khatib, said: "The Shalit deal is a historic revolution that comprises the entire Palestinian people – from Jerusalem and from Gaza."

"This is the first time, and we thank the organization that stood behind the deal – it doesn’t matter what it is and what's its name," he said, referring to Hamas. "This deal proved our powerful position." 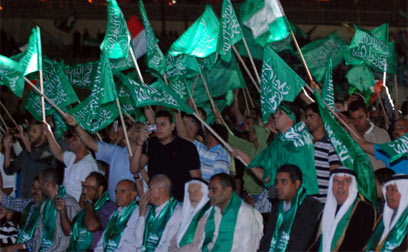 During the rally, thousands of participants called for the release of more Arab Israelis in the framework of the Shalit deal.

Following Hamas' insistence, six Arab Israeli men and two Arab Israeli women will be released from prison as part of the Shalit swap. Their families have not yet been officially informed of their release, but celebrations are underway in their communities.

Such festivities were held at the home of Muhammad Jabarin from Umm al-Fahem, who was convicted of murdering a Palestinian collaborator with Israel. Revelers fired firecrackers and handed out sweets to celebrate his imminent release.

The prisoner's mother said: "We'd like to thank everyone who dealt with the release of prisoners. This is a message to the State of Israel that we are stronger, and that we shall stand up to the racism and false accusations."

The MK expressed his hope that Israeli prisons will be emptied of detainees and that peace shall prevail, his office said.

Moran Azoulay contributed to the report