Jewish state won't harm Palestinian prisoners freed as part of Shalit deal – if they don't return to terror, an Egyptian source privy to the negotiations tells Al-Hayat; Israel to reopen Gaza border after deal is done, he says

Israel would not harm any of the Palestinian inmates it sets free as part of the prisoner swap deal signed with Hamas – unless they attempt to act against the Jewish state, a senior Egyptian official told the Al-Hayat newspaper. The source added that Israel will ease its blockade on the Gaza Strip, but only on certain conditions.

According to the report, Israel and Hamas will continue indirect talks, aiming to finalize the deal. The source said that the sides must decide on a timetable and a location for the implementation of the swap, but said that the exchange will not take place at Rafah.

The source told the London-based newspaper that Israel is expected to reopen its border crossing into Gaza after the deal is done, but only if Hamas agrees to the return of international observers to the region, and the placement of Palestinian Authority officials at the checkpoints. 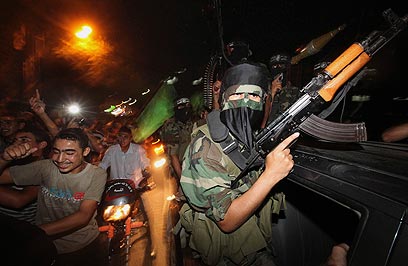 IDF soldier Gilad Shalit, who has been held captive by Hamas for the past five years, is to be exchanged for 1,027 Palestinian prisoners as part of the deal. According to the official, the 550 inmates that are to be released in the second phase of the swap, in two months, are defined as security prisoners.

The prisoner list will be compiled by Israel, and will include those who have already served the bulk of their sentences. The inmates' health will be taken into account as well.

'Security prisoners to be freed in 2nd round'

The Egyptian official revealed that the latest round of negotiations on the deal began in August. "We launched a bolstered round of talks, and it was agreed that the negotiations should be held under complete secrecy, away from the eye of the media, to ensure its continuity and success," he said.

Most of the inmates that are to be released were sentenced to long prison terms, which they began to serve prior to the year 2000.

Addressing Israel's refusal to release top security prisoners Marwan Barghouti and Ahmed Saadat, the official said that Jerusalem "vetoed certain names, including Saadat's… We fought until the last moment to include Barghouti in the list, but the Israelis insisted, while claiming that his release demands the cabinet's approval."