Ahlam Tamimi, to be deported to Jordan
Photo: Raanan Ben-Zur

Israel's Prison Service publishes names of 477 prisoners to be released as part of first stage of prisoner swap deal including murderers of Nachshon Wachsman, Ilan Sa'adon and Avi Sasportas. Prisoners notified of their impending release

Israel's Prison Service published the list of the 477 prisoners to be released as part of the first stage of the Shalit deal on its website on Saturday night. The list contains the names of 450 male prisoners, including 280 inmates serving life sentences, and 27 female prisoners. All prisoners received official notice about their impending release on Sunday morning. The second stage of the deal will see 550 additional prisoners chosen by Israel being released.

Among the prisoners serving life sentences several stand out. Yehia Sanwar, serving four life sentences, was involved in the kidnapping and murder of Nachshon Wachsman. He founded Hamas' security force in Gaza and served as chairman of the Hamas prisoners committee. His brother was among the planners of the Shalit abduction. Jihad Yaghmur, who was also involved in the Wachsman murder is also included in the list.

Mohammed Shratkha, who was head of the cell that kidnapped and murdered Ilan Sa'adon and Avi Sasportas will also be released as part of the deal. Commander of Hamas' 101 Unit and onetime partner of Mahmoud al-Mabhouh, Shratkhe was sentenced to three life sentences. Ibrahim Shammasina, who was involved in the murders of teenagers Ronen Karamani and Lior Tubul, taxi driver Rafi Doron and IDF soldier Yehoshua Friedberg, is also included in the list.

Walid Anajas, who was sentenced to 36 life sentences for his part in the Moment Café bombing and a terror attack in Rishon Lezion will also be released.

The three terrorists behind the Haifa bus bombing in 2002 are also set to be released. The victims' parents are slated to file a petition to prevent their release.

The oldest prisoner to be released is Mohammed Hemad who was arrested in 1976. 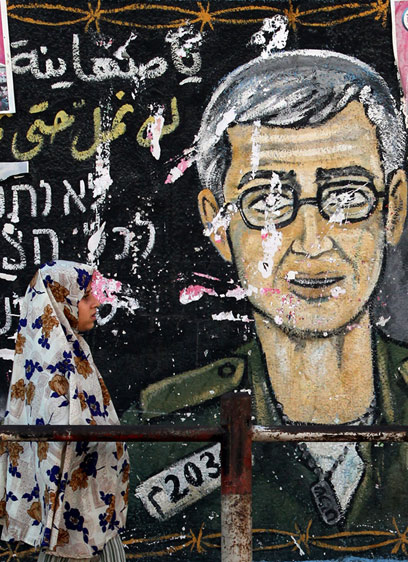 The Justice Ministry has opened a call center to operate from Sunday until the deal is implemented where citizens will be able to receive information about the prisoners and file complaints. Victims' families have 48 hours from the time the list is issued to file objections.

The IDF and security establishment are stepping up preparations for the implementation of the Shalit deal. On Friday, senior IDF officials visited an Air Force base in central Israel where Gilad Shalit will likely meet his family on Tuesday. Shalit will be flown from Egypt to the base and the IDF Spokesperson's Unit will be the only body to document Shalit's reunion with his family on camera.

Gilad will receive support from the Medical Corps until his official discharge from the IDF in the coming weeks. He will then undergo rehabilitation by the Defense Ministry. Defense Ministry director Udi Shani announced that Shalit will automatically be declared as a post traumatic stress disorder (PTSD) victim, which will entitle him to a lifetime of mental treatment. He will later on also be declared as a disabled IDF veteran.

Defense Ministry officials will hold a status evaluation on the state of border crossings ahead of the release of the prisoners. The Qalandiya checkpoint will see 96 prisoners passing through. Some 300 terrorists will be moved to Gaza.