VIDEO - Several anti-Semitic incidents have been reported during "Occupy Wall Street" demonstrations in New York as Jews were blamed for the turmoil in America's financial markets. In addition, anti-Israel signs were raised against "Israel's occupation of Gaza".

The "Emergency Committee for Israel" has published a hard-to-watch clip in which Jews are attacked and blamed for the financial crisis and assistance to Israel. The committee is a neo-conservative body headed by William Kristol, the Jewish editor of the Weekly Standard, which aims to convince Jews to vote for a Republican presidential candidate.

It should be noted that the video is political in nature and seeks to tie President Obama and House Minority Leader Nancy Pelosi to the protesters, urging them to "stand up to the mob".

The White House, on its part, is trying to take advantage of the demonstrations against Wall Street while the anti-Obama camp is attempting to tie the protesters to the far Left and Israel's enemies. 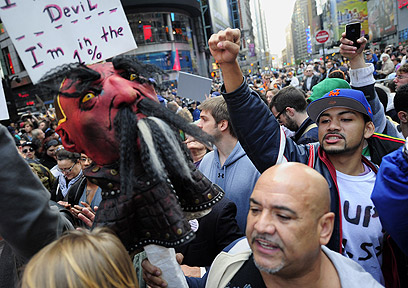 In the clip, a young demonstrator is seen arguing with an older Jewish man wearing a yarmulke. At one point, the young man says, "I work, earn seven dollars an hour. You have the money. You don't speak English? You are from Israel? Go back to Israel." Another African-American protester accuses the Jews of taking over America. "The smallest group in America controls the money, media and all other things. The fingerprints belong to the Jewish bankers. I am against Jews who rob America. They are one percent who control America. President Obama is a Jewish puppet. The entire economy is Jewish. Every federal judge in the East Coast is Jewish."

Among the signs that could be seen in the protest were, "Gaza supports the occupation of Wall Street", "Hitler's Bankers", and a sign urging people to Google the following: Wall St. Jews, Jewish billionaires, Jews & Federal Reserve Bank.

In addition, the anti-Israel group Code Pink: Women for Peace was spotted as well as other Arab groups.