Exactly 25 years since IAF navigator fell captive, senior official says: 'When I look at the future, which could bring about major problems, I think the (Shalit) deal should have been rejected even if his fate would be similar to that of Ron Arad'

"Not a day goes by in which I don't think about Ron Arad, especially during these days. I think to myself what have I not done that could have been done to bring him home. But when I look at the future, which could bring about major problems, I think the (Shalit) deal should have been rejected even if his fate would be similar to that of Ron Arad."

The above conclusion was made by a senior defense official who was involved in the state's missing and captive soldiers issue for an extended period of time and had a central role in the contacts to secure the release of captive IAF navigator Ron Arad.

Exactly 25 years since Arad was captured in Lebanon and days before the implementation of the Shalit prisoner exchange deal, the senior official tells Ynet about the heavy price the state has to pay for the return of Gilad Shalit.

"We could have paid the price back then and maybe Ron Arad would have come home," he says. "When Yitzhak Rabin believed that Amal's price should have been questioned, I thought we should have accepted the offer and pay the price."

However, in the years that passed, the senior official changed his mind. "Today I have much experience from other deals I have been involved in, and perhaps Rabin was right because reality led to kidnappings and more extortion. One thing's for sure – we should have changed the rules back then – to determine an unequivocal, uncompromising position and then perhaps we would not be where we are today."

Latest stories on the Shailt deal:

The official said that the attempt to improve our positioning resulted in Arad's disappearance. "I have witnessed the effect the Jibril prisoner exchange deal had on Rabin – if it weren’t for Jibril, Ron would be here, but Rabin refused to accept those terms. The terms, by the way, were far less dramatic than the current framework of the Shalit deal. I'd like to believe that with the terms offered back then, Ron Arad could have been released."

According to the official, "When I dealt with the Arad case, he was in the hands of Nabih Berri, head of the Amal movement. The group's security officer Mustafa Dirani deserted and took Ron Arad with him and moved from Beirut to the Beqaa Valley. From there the Iranians took him and that was the end of it. I don't know if he died a natural death or has been killed."

The official is certain that the Ron Arad case was on the prime minister's mind when he decided to accept the Shalit deal. "I have no doubt that Arad was in the prime minister's thoughts and on his conscience. Ron Arad is a national trauma and I understand its significance. Considering the demands that have been there from the onset, the prime minister did not get a bad deal. But still, it is an opening to major problems in the future." 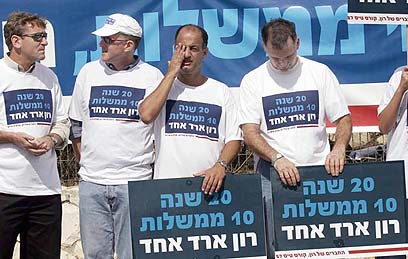 The official referred to the differences between the present deal to the one that was offered to Rabin and Shamir to release Arad – an offer they ended up rejecting. "In both cases, I believe the Iranians were involved. I had estimated that as long as Khaled Mashaal represents Hamas and he is backed by the Iranians while operating out of Syria, there would not be a deal because the Iranians are not interested in a solution but only want to agonize us. Once Mashaal does not rule at the top, the Syrians are in trouble and the Iranians are losing their influence, the path was paved for a deal."

Despite the guilty conscience over the fact that Ron Arad disappeared while in captivity, the official says he objects to the current deal. "Everyone says that this is the price we have to pay, but with all due respect, I am not willing to pay for one what may result in another attack. The prospects of that happening are high. I am sorry to say this but we must think about the future, think about tomorrow. The Shin Bet chief says he could handle it? He's the one that will have to deal with reality."

The official recently appeared before the Shamgar Committee that was established to examine the subject of prisoner exchanges. "I told them that we needed to open a new page, to change the rules of the game. The Shalit deal has been signed, I am happy it's over and that Gilad is coming home because it was a trauma for all of us, but we cannot live like this. We must know that from now on, whenever we face such a dilemma, we will know that there is a clear framework that does not leave room for further extortion."

On Tuesday, Noam Shalit chose to begin his statement after the cabinet approved the deal that would bring his son back with a mention of Ron Arad. "Today, the Arad family marked 25 years since Ron Arad was captured and our happiness is mixed with the Arad family's sadness for not seeing Ron come home."