Dozens of Palestinians gathered near the Ofer Prison on Tuesday to celebrate the release of prisoners as part of the Shalit prisoner exchange deal. Celebrations were also noted in Jerusalem and Umm al-Fahm.

Palestinians were seen waving Hamas and Palestinian flags outside the prison. MK Arieh Eldad (National Union) also arrived at the scene carrying a sign which said: "In the name of the future victims." Eldad said: "Everyone speaks on behalf of Gilad Shalit, I am here to speak on behalf of the next fatalities. They are our children too."

Celebrations were noted in east Jerusalem as well, where some of the prisoners will arrive upon release. Residents gathered in Issawiya in anticipation of the prisoners' arrival. Palestinian flags were seen inside moving cars. 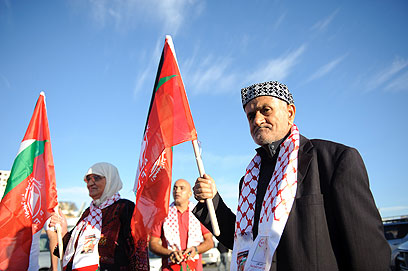 Early on Tuesday, families of prisoners Khaled Mihsan and Samer Mustafa, both Issawiya residents, arrived at the neighborhood. Mihsan's nephew was wearing a t shirt with Khaled's picture on it. "He won't go back to terror, it's over," he said.

"We want to live in peace, and Khaled only wants to go back to his wife and kids."

A crowd of hundreds circled a car decorated with Khaled's photos which played loud music. "We want peace but what kind of a peace does Israel give us?" Muhammad, a local resident, said. "As long as the Israeli occupation in Gaza continues, we the Palestinians will do anything to exist and liberate the prisoners from Israeli jails."

He did not rule out the possibility that more Israeli soldiers will be abducted. "This is a holiday for the Palestinian people," he said. 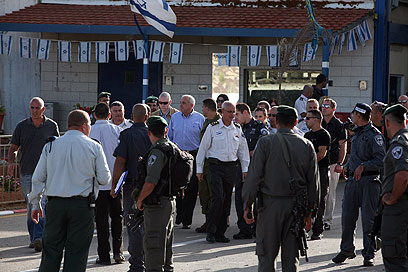 Dozens also gathered in Umm al-Fahm to greet prisoner Muhammad Mahaja. His daughter said: "We are waiting for my father patiently and with concern. I missed him very much and I'm waiting to hold him and touch. This is a historic day for us, we shall never forget it. "