After failing to convince Iraq to retain US military presence, President Obama announces that all troops are to be pulled out by year's end

US President Barack Obama said on Friday he would pull US troops from Iraq this year, almost nine years after the US invasion, after he failed to convince Iraq that several thousand troops should remain in part as a balance against neighboring Iran.

After months of negotiations with officials in Baghdad failed to reach an agreement to keep perhaps thousands of US troops in Iraq as trainers, Obama announced he would stick to plans pull out entirely by year's end.

"As promised, the rest of our troops in Iraq will come home by the end of the year. After nearly nine years, America's war in Iraq will be over," Obama told reporters. The full withdrawal of American troops, with the exception of around 160 soldiers who will remain behind under State Department authority to train Iraqi forces and a small contingent of soldiers guarding the US embassy, marks a major milestone in the war that started in 2003 and resulted in the removal of Saddam Hussein from power in Iraq.

An estimated 4,479 US troops were killed in the Iraq war.

Obama spoke after a video conference with Iraqi Prime Minister Nuri al-Maliki and said the two were in full agreement about how to move forward.

Both Obama and Maliki said the removal of the approximately 40,000 remaining troops would allow the two nations to move to a new phase in their closely intertwined yet complicated relationship.

"The two sides' points of view were identical in terms of starting new phase of our strategic relations ... after achieving withdrawal at the end of the year," Maliki's office said in a statement.

But the announcement underscores the gaps that remain between US and Iraqi priorities and political realities. 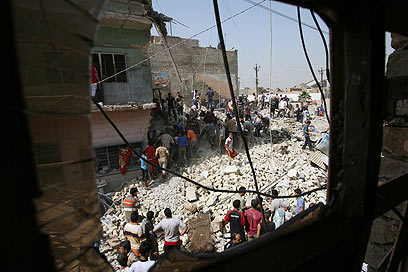 Earlier this week, US Defense Secretary Leon Panetta said American and Iraqi officials were continuing discussions that might permit US soldiers to stay beyond a December 31 deadline.

In the end, the two countries were apparently unable to reach agreement over legal protections for any remaining US soldiers.

For months, Iraq's fractured political elite was at odds over whether American soldiers should stay as trainers. Baghdad rejected any legal immunity for US soldiers, and Washington said that meant no deal.

The US military role in Iraq has been mostly reduced to advising the security forces in a country where levels of violence had declined sharply from a peak of sectarian strife in 2006-2007, but attacks remain a daily occurrence.

Senior Iraqis say in private they would like a US troop presence to keep the peace between Iraqi Arabs and Kurds in a dispute over who controls oil-rich areas in the north of Iraq.

Yet as the Obama administration frets about the influence of Baghdad's neighbor Tehran, the US presence will remain substantial. US officials say the embassy in Baghdad, an imposing, fortified complex by the Tigris River in Baghdad's Green Zone, will be the largest in the world.