Mangled body of slain Libyan leader was put on display in freezer located at Misrata shopping center, drawing hordes of residents hoping for chance to view it; Questions over the tyrant's impending burial and his violent death deepen

Muammar Gaddafi's blood-streaked body was on display in a commercial freezer at a shopping center Friday as Libyan authorities argued about what to do with his remains and questions deepened over official accounts of the longtime dictator's death. New video emerged of his violent, chaotic last moments, showing fighters beating him as they drag him away.

Nearly every aspect of Thursday's killing of Gaddafi was mired in confusion, a sign of the difficulties ahead for Libya. Its new rulers are disorganized, its people embittered and divided. But the ruling National Transitional Council said it would declare the country's liberation on Saturday, the starting point for a timetable that calls for a new interim government within a month and elections within eight months.

The top UN rights chief raised concerns that Gaddafi may have been shot to death after being captured alive. The fate of his body seemed tied up in squabbles among Libya's factions, as fighters from Misrata – a city brutally besieged by Gaddafi's forces during the civil war – seemed to claim ownership of it, forcing the delay of a planned burial Friday. Also muddled was the fate of Seif al-Islam Gaddafi, the only Gaddafi son who stayed in Libya and reportedly survived after his father's Aug. 21 ouster. It appeared Friday that he was still at large: some government ministers had said he was wounded and in custody in a hospital in the city of Zlitan, but a military official at the hospital, Hakim al-Kisher, denied he was there.

In Misrata, residents crowded into long lines to get a chance to view the body of Gaddafi, which was laid out on a mattress on the floor of an emptied-out vegetable and onions freezer at a local shopping center. The body had apparently been stowed in the freezer in an attempt to keep it out of the public eye, but once the location was known, that intention was swept away in the overwhelming desire of residents to see the man they so deeply despised.

Men, women and children filed in to take their picture with the body. The site's guards had even organized separate visiting hours for families and single men.

"We want to see the dog," some chanted. 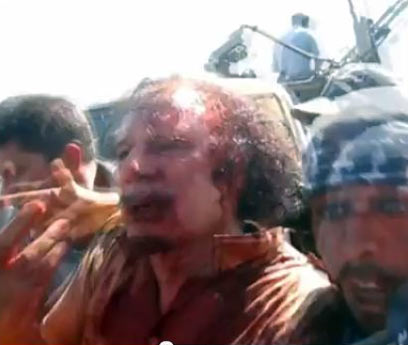 Gaddafi's 69-year-old body was stripped to the waist, his torso and arms streaked with dried blood. Bullet wounds in the chest, abdomen and left side of the head were visible.

The bloody siege of Misrata over the summer instilled a particularly virulent hatred of Gaddafi there – a hatred now mixed with pride because he was captured and killed by fighters from the city.

New video posted on Facebook showed revolutionary fighters dragging a confused-looking Gaddafi up the hill to their vehicles after his capture and less than an hour before he was killed. The young men scream "Muammar, you dog!" as their former leader wipes at blood covering the left side of his head, neck and left shoulder. In Tripoli, joy over Gaddafi's end spilled into a second day as thousands converged on central Martyrs' Square for Friday prayers and celebrations. Men danced and hoisted the country's new red-green-and-black flag.

NATO to wind down Libya operation

The Western-backed National Transitional Council, a collection of former rebels, returned exiles, technocrats and Islamists, has always been united behind its goal of ousting Gaddafi. Now the group must overcome divisions and competing self-interests to rebuild the oil-rich North African nation, which was stripped of institutions under Gaddafi.

The NTC said interim leader Mustafa Abdul-Jalil will formally declare liberation on Saturday in the eastern city of Benghazi, where the revolution began in mid-February. Prime Minister Mahmoud Jibril has promised to resign, saying he will not be part of any new government and will instead turn his attention to fighting corruption.

The transitional council has asked the United Nations "to play a significant role" in helping them write a constitution, hold elections and build democratic institutions, Ian Martin, the UN envoy to Libya, said.

Gaddafi was killed when revolutionary fighters overwhelmed him and the last of his loyalists in his coastal hometown Sirte, the last bastion of his regime to be captured after weeks of heavy fighting.

Gaddafi's family, most of whom are in Algeria or other nearby African nations, issued a statement calling for an investigation into how Gaddafi and another of his sons, Muatassim, were killed. In the statement on the pro-Gaddafi, Syria-based TV station Al-Rai, they asked for international pressure on the NTC to hand over the bodies of the two men to their tribe.

He said Friday following a meeting of the alliance's governing body that the bloc made a preliminary decision to end air operation on October 31, and will make a formal decision next week. The council took into account the wishes of Libya's new government and of the United Nations, under whose mandate NATO carried out its operations.