'I thought I was going to die'

A 12-year-old Jerusalem girl recalled the terror she experienced as she fled from an assailant who moments earlier stabbed another teen multiple times.

The girl told Ynet that around 3:15 pm on Saturday she and her 6-year-old brother stood on the street at their neighborhood of Ramot and watched the assailant as he attacked two youths.

"At first I thought he was playing with them, and then they started to run away," she told Ynet. "That was when I realized he had a knife in his hand." 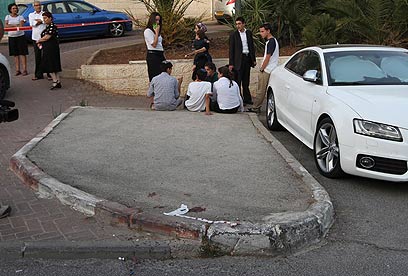 He managed to stab one of the youths, Yehuda Ne'emad, in the stomach and the back. Next, the assailant began running in the girl's direction.

"I didn't think too much," she said. "I just grabbed my brother's hand and we ran."

As the two fled towards their house, the assailant chased after them.

"The whole thing lasted 2-3 minutes," she recalled. "I thought I won't be able to escape because he was so close to me. I was sure I was going to die, but I believed that with God's help, there will be a miracle."

At that point, onlookers came out on the street, scaring the assailant away towards an adjacent valley. Ne'emad was taken to the hospital and underwent surgery. Hospital officials said that his condition is stable and he is out of immediate danger. 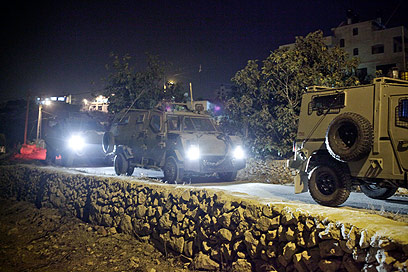 Troops in search of suspect on Saturday (Photo: Noam Moskovich)

The girl said that it was a miracle that saved her from a similar fate.

"It was only due to God's help that I was able to escape," she said. "I am sure that I couldn't have escaped alone because he was much faster than me."

Police and army forces launched a massive manhunt for the suspect, working well into Saturday night. Troops searched homes in the nearby Palestinian village of Kfar Iksa, where the suspect was thought to be hiding. An operations center was established on the outskirts of the village to coordinate the search efforts.

The defense establishment estimated that the terrorist exploited the fact that the separation fence, which divides Israeli and Palestinian territories, does not extend to Kfar Iksa. He could therefore slip in and out of the village unimpeded.