Magnitude 7.2 earthquake strikes in southeast of country near Iranian border; 85 people are reported killed, but scientists estimate up to 1,000 could be dead. Reports claim buildings collapse, people trapped under wreckage; IDF prepares to send aid

A powerful 7.2-magnitude earthquake struck eastern Turkey on Sunday, collapsing dozens of buildings into piles of twisted steel and chunks of concrete. Desperate survivors dug into the rubble with their bare hands, trying to rescue the trapped and injured.

State-run TRT television reported that at least 59 people were killed and 150 injured in the eastern town of Ercis, 25 others died in Van and a child died in the nearby province of Bitlis. Turkish scientists estimated that up to 1,000 people could already be dead, due to low housing standards in the area and the size of the quake.

Ercis, a town of 75,000 in the mountainous province of Van close to the Iranian border, was the hardest hit. It lies on the Ercis Fault in one of Turkey's most earthquake-prone zones. The bustling regional center of Van, 55 miles (90 kilometers) to the south, also suffered substantial damage. Prime Minister Tayyip Erdogan was travelling to Van and the cabinet was expected to discuss the quake at a meeting called for Monday morning.

Rescuers in Ercis scrambled to find survivors in a flattened eight-story building that had shops on the ground floor, television footage showed. Residents sobbed outside the ruins, hoping that missing relatives would be rescued.

"My wife and child are inside! My 4-month-old baby is inside!" CNN-Turk television showed one young man crying. "There are so many dead. Several buildings have collapsed. There is too much destruction," Zulfikar Arapoglu, the mayor of Ercis, told NTV television. "We need urgent aid. We need medics."

The quake's epicenter was in the village of Tabanli, 10 miles (17 kilometers) from Van.

Turkey lies in one of the world's most active seismic zones and is crossed by numerous fault lines. Sunday's earthquake struck in the country's most earthquake-prone region, around Lake Van near the border with Iran.

US scientists recorded eight aftershocks within three hours of the quake, including two with a magnitude of 5.6.

Atalay said authorities had no information yet on remote villages but the governor was touring the region by helicopter to assess damage.

Authorities did not provide a casualty figure but the Kandilli observatory, Turkey's main seismography center, said the quake was capable of killing many people.

"We are estimating a death toll between 500 and 1,000," Mustafa Erdik, head of the Kandilli observatory, told a televised news conference. 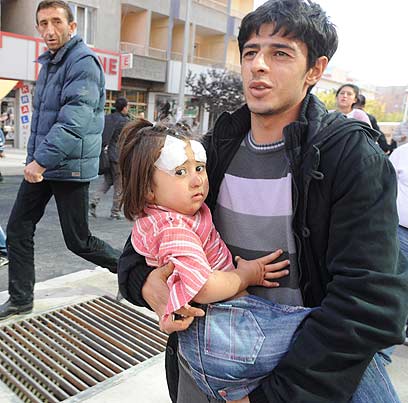 In Van, terrified residents spilled into the streets in panic as rescue workers and residents using their bare hands and shovels struggled to find people believed to be trapped under collapsed buildings, television footage showed. At least 50 people were treated in the courtyard of the state hospital, the state-run Anatolia news agency said.

Serious damage and casualties were also reported in the district of Celebibag, near Ercis.

"There are many people under the rubble," Veysel Keser, mayor of Celebibag, told NTV. "People are in agony, we can hear their screams for help. We need urgent help."

Houses also collapsed in the province of Bitlis, where at least one person, an 8-year-old girl was killed, authorities said. The quake also toppled the minarets of two mosques in the nearby province of Mus, reports said.

NTV said Van's airport was damaged and planes were being diverted to neighboring cities.

Gul thanked Peres, but said that the Turkish search and rescue forces are expected to be able to handle the relief efforts.

Earlier, Defense Minister Ehud Barak asked the head of the Political-Military Affairs section at the ministry, Amos Gilad, to offer Turkey "all the help it needs". IDF Chief of Staff Lieutenant General Benny Gantz ordered the army to prepare to send aid to Turkey. Gantz said that an IDF delegation will head to Turkey once it receives approval from the government.

Two people were killed and 79 injured in May when an earthquake shook Simav in northwest Turkey.

Reuters and Yoav Zitun contributed to the report