Checking the ballot-boxes ahead of elections
Photo: AP

Tunisians waited in lines to vote Sunday in the nation's first truly free elections, the culmination of a popular uprising that set off similar rebellions across the Middle East.

The party expected to come out on top is the moderate Islamic movement Ennahda, whose victory, especially in a comparatively secular society like Tunisia, could have wide implications for similar religious parties in the region.

Authorities say nearly 70% of registered voters have cast ballots so far. Kamel Jendoubi, head of the electoral commission, said turnout was "over 60% and close to 70%" by 4 pm (1500 GMT; 11 am EDT) Sunday, three hours before the polls close.

He told reporters there was some "soft" intimidation of voters, such as street demonstrations and people continuing to campaign on voting day, which is against the rules. He said some parties had received warnings.

Voters - women with headscarves and without, former political prisoners, young people whose Facebook posts helped fuel the revolution in the North African country - are electing a 217-seat assembly that will appoint a new government and then write a new constitution.

Voters are definitively turning the page on the 23-year presidency of Zine El-Abidine Ben Ali, who was overthrown by a month long uprising on January 14 stirred by anger at unemployment, corruption and repression.

If Tunisia's elections produce an effective new government they will serve as an inspiration to pro-democracy advocates across the region, including in next-door Libya, where longtime dictator Muammar Gaddafi was killed last week by rebel forces. 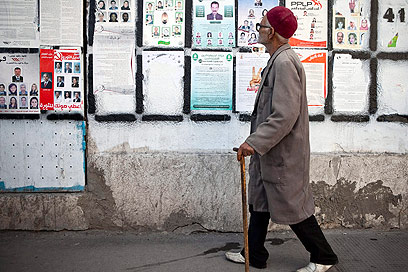 "It's a historic day, a moment of joy and celebration. Even if I have to stand in line 24 hours, I would not give up the chance to savor this air of freedom," said former political prisoner Touhami Sakouhi.

It's a cacophony of choice in a country effectively under one-party rule since independence from France in 1956, and where the now-popular Islamist party Ennahda was long banned.

Some expressed concern that despite its moderate public line, Ennahda could reverse some of Tunisia's progressive legislation for women if the party gains power.

"I am looking for someone to protect the place of women in Tunisia," said 34-year-old Amina Helmi, her hair free of the headscarves that some Tunisian women wear. She said she voted for the center-left PDP party, the strongest legal opposition movement under Ben Ali. She said she was "afraid" of Ennahda.

There are 7.5 million potential voters, though only 4.4 million of them, or just under 60%, are actually registered.

A proportional representation system will likely mean that no political party will dominate the assembly, which is expected to be divided roughly between the Ennahda party, centrist parties and leftist parties, requiring coalitions and compromises during the writing of the constitution.