Despite Turkey's rejection of Israeli aid in wake of deadly quake, independent search team gets ready to fly out, help rescue efforts. 'If they need us we'll head out immediately'

Despite Turkey rejecting Israel's offer to send humanitarian aid after a deadly earthquake hit the country earlier Sunday, dozens of Israeli volunteers still await Ankara's approval to allow them to fly out and assist the search and rescue efforts.

The Fast Israeli Rescue & Search Team (FIRST) sent some 650 emails to the organization's volunteers immediately after learning about the quake, requesting their help in rescue efforts.

"We're civilians, independent. We don't need favors from anyone," a FIRST official said.

The national association works closely with a Turkish search and rescue unit, independently of political and diplomatic matters. The two units are comprised of experienced search and rescue volunteers which are not linked to any official administrations. The Turkish unit has even visited Israel in the past to conduct joint exercises.

The Israeli team is quite familiar with the Turkish field conditions having previously assisted in treating victims after an earthquake shook the country nearly nine years ago. "We're colleagues and we have a close bond," FIRST Spokesman Oliver Eliezer told Ynet. "We work in similar ways, speak the same languages, wear the same shirts with the same colors and speak in rescue codes."

Some 25 members from the Turkish team are already on their way to quake-stricken area, updating their Israeli counterparts via satellite phone. 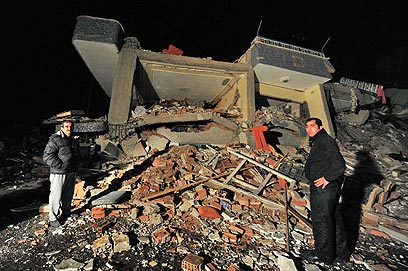 In shambles. Turkey post earthquake (Photo: AFP)
"If they need us we'll head out immediately," said Eliezer. Turkey has not yet made any call for international assistance, a Foreign Ministry official said Sunday, speaking on condition of anonymity. He added that Turkey had received offers of assistance from dozens of countries, including Israel, and so far had declined help from all of them. The announcement comes following an Israeli offer for aid made by President Shimon Peres in a phone call with Turkish President Abdullah Gul. Gul replied that he hopes local rescue forces can manage in the meantime.

Meanwhile, the US expressed concern over the disaster. The United States is following reports about Turkey's earthquake with great concern and is ready to help, President Barack Obama said on Sunday.

"We stand shoulder to shoulder with our Turkish ally in this difficult time and are ready to assist the Turkish authorities," Obama said in a written statement.